It seems that the price of Fallout 76 Atoms has something of an irregularity if you’re looking to buy them for PS4 through Amazon. The platform offers download codes for three different amounts of Atoms, but for some reason, these codes are much more expensive for the PS4 compared to Xbox One. In fact, there appears to be an increase of around 250%!

The Price of Fallout 76 Atoms for PS4 on Amazon

The discrepancy in pricing for the Fallout 76 Atoms was first spotted by TSA. They noticed that the price for the Atoms download codes on Amazon weren’t equal by platform. In fact, the PS4 download codes are massively more expensive, and there doesn’t appear to be a clear reason why. 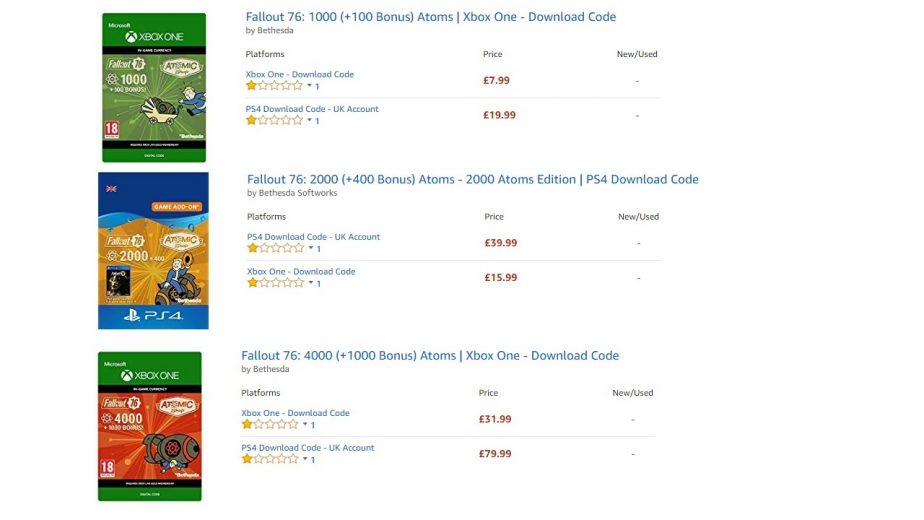 When TSA queried the discrepancy with Amazon’s Customer Support, they were told that there; “isn’t any error on pricing”. According to the same customer support representative, the prices are determined by agreements which Amazon has with the content owners. In this case, that would presumably be Bethesda Softworks, the game’s publisher. However, the difference in price is so massive that it really doesn’t make any sense. As such, it’s possible that this is an error on the part of either Amazon or Bethesda which had yet to be spotted. There doesn’t seem to be any obvious reason why the same product would cost 250% more on one platform as opposed to another, especially when that product is merely micro-transaction currency. Hopefully Bethesda or Amazon resolves the situation or at least provides ample explanation soon.