A picture of Anthem‘s early microtransactions store has recently surfaced on Reddit, and the pricing has already worried a lot of players. It unfortunately shows armor packs costing as much as 2000 Shards. Shards is the currency representing real money in the game, with 100 shards costing roughly $1, making these skin packs cost around $20 in real life money. As shocking as this may be, BioWare’s Chris Schmidt has come out and stated that the pricing is not set in stone.

“These (prices) don’t represent final, stamped for all of eternity pricing. We are iterating on our economy design and balance almost daily, so you’re seeing a snapshot of one iteration. This is why we tend to not discuss things like pricing, because it’s one of those iterative things that’s sure to change frequently right up until the day you play the game.” 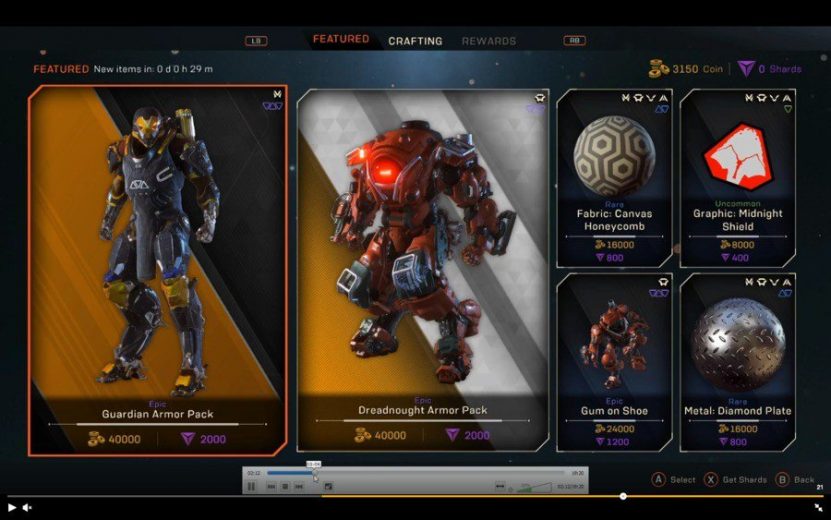 It is also important to remember that BioWare has previously stated that every single item in the store can be purchased using in-game coins. This means that even if they are pricy, you theoretically don’t have to spend any actual money on any of them. Of course how long it takes to grind to get enough coins for them remains to be seen. So while this may seem like extortion at first, it’s important to remember that the game isn’t even out yet and that everything is subject to change.

Anthem’s open demo is due this Friday, so make sure you check that out if you want some hands-on experience with BioWare’s new epic shooter. And check out my thoughts on the VIP demo if you want some more info on the game!