While Bethesda is headlining QuakeCon with Doom Eternal, a Fallout 76 panel was held at the event today. The panel looked specifically at Fallout 76’s perk and character customization systems. During the event, Bethesda released a new Fallout 76 Perks Trailer, and gave fans a look at the new and revamped S.P.E.C.I.A.L. system.

The Fallout 76 panel, as expected, was led by director Todd Howard. He explained to the assembled fans how Fallout 76 re-uses the S.P.E.C.I.A.L. system of attributes which has appeared in other Fallout titles. However, where the game differs is in its use of the new Perk Cards. Essentially, every time a player levels up, they can invest a point into one of their attributes. For each attribute, they can equip Perk Cards, which give them abilities like those from Fallout 4.

Howard highlighted the Gladiator card, which can be assigned to Strength. Depending on if it’s 1-, 2-, or 3-star rank, the card grants players a bonus to one-handed melee weapon damage; +10% per rank. Apparently, Fallout 76 includes hundreds of different Perk Cards, allowing for an enormous number of potential combinations. They vary wildly too, such as Quack Surgeon, which allows a player to revive other players with alcohol. Without NPCs in Fallout 76, the Charisma stat in particular has had to be revised. Now, it seems to primarily boost interactions with other human players, such as teamwork benefits. 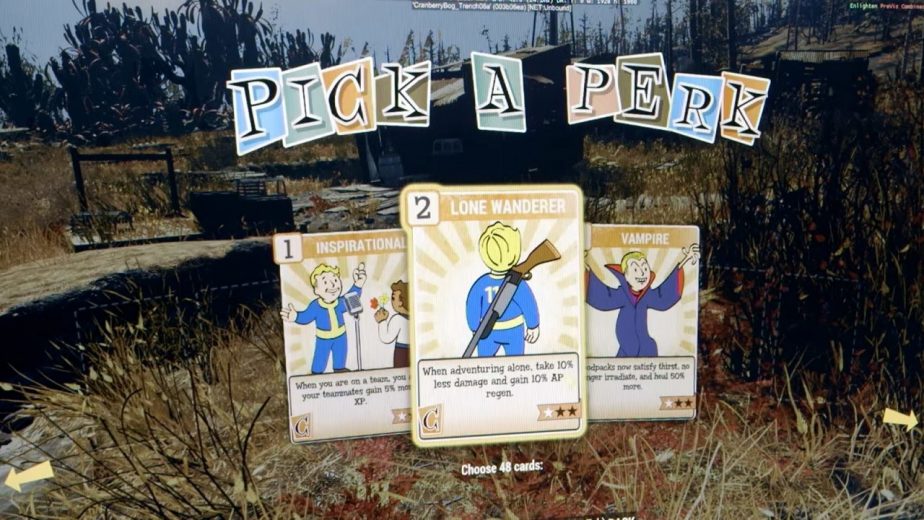 According to Howard, Fallout 76 will offer players “packs” of Perk Cards every other level during the start of the game. Eventually it will slow to every five levels. Each Perk Card pack contains four different Perk Cards selected at random. It’s unknown whether the game will intentionally provide cards relevant to a person’s playing style, or whether the selection will be purely random. It is apparently possible, however, to acquire cards which players cannot equip until they reach a higher level.