Players have just a couple of months to wait before the launch of Battlefield 5, which will be releasing in November. The game’s Open Beta recently drew to a close, and in its wake DICE is focusing on final tweaks and changes before launch. Although they won’t be giving fans any more chances to try the game before then, they have published a series of detailed class breakdowns. Thanks to that, players can get a sense of what the Medic class will play like once the game does release.

What Players Can Expect From the Battlefield 5 Medic Class

Although, like the Assault class, the Medic class thrives on the frontlines, it is for very different reasons. Their weapons tend to be similar in range to those of the Assault class, but as DICE puts it; “the Medic’s best weapon is the syringe, which revives any teammate faster than the new non-Medic revive available to everyone in your squad”. Although all players can now revive their teammates, that certainly doesn’t mean that your squad can do without a Medic. They certainly still provide a valuable role.

Equipment-wise, their weapon options are more limited than those of the Assault; their only Primary Weapon Category is Sub-Machine Guns. Their Starter Gadgets are Medical Pouch and Smoke Grenade Launcher. The launcher is best used to cover their allies as they dash in for a revive. More weapons and gadgets can be unlocked as player progress. 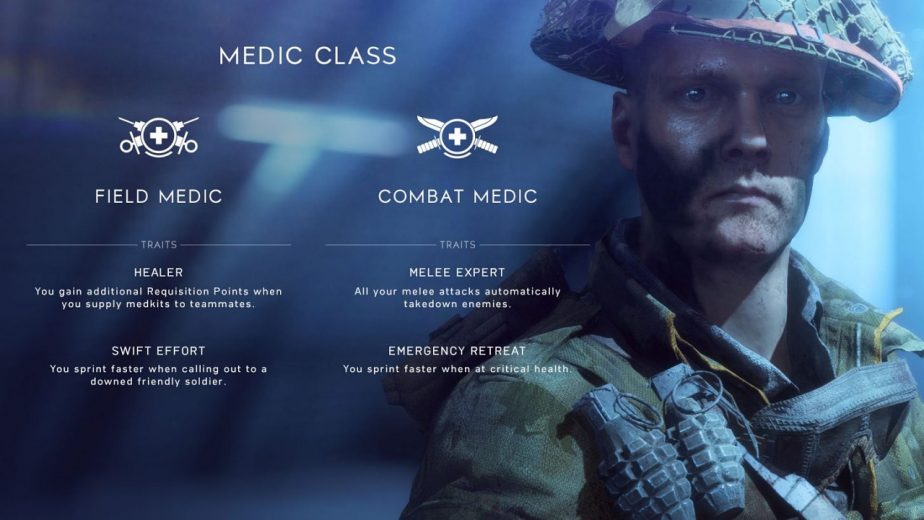 In Battlefield 5, every class has a number of “Combat Roles”. These sub-classes give players additional abilities and options, refining certain playstyles to a degree. Each class will have two Combat Roles at launch; one which is equipped by default and one which can be unlocked. More Combat Roles will come to Battlefield 5 in post-launch content.

The default Medic Combat Role is Field Medic. This role gives players the Healer ability, granting bonus Requisition Points whenever they supply medkits to their teammates. It also grants Swift Effort, letting the Medic sprint faster when they call out to downed players. The second Medic Combat Role is Combat Medic. Instead of Healer, Combat Medics get Melee Expert, letting their melee attacks automatically takedown enemies. They also gain Emergency Retreat, letting them sprint faster when their health is critical.