Bethesda has revealed another one of the studio’s upcoming Fallout 76 weapons. Unlike more staple entries, like the Pipe Rifle or Fatman, however, this weapon is more than a little strange. It has a relatively simple name, however; The Guitar Sword. The screenshot posted on Twitter gives fans a rough idea of what the sword is capable of… but it remains to be seen whether players can actually play it as an instrument.

A screenshot of the Fallout 76 Guitar Sword was posted on Twitter earlier today by the official Fallout Twitter account. The weapon appears to be made from metal piping studded with crude metal blades, with guitar strings strung across it and a handle affixed at the base. The weapon’s stats show that it deals 45 damage, has a speed of MEDIUM, a weight of 3, and a value of 45. Interestingly, the weapon is apparently “Level 15”. It’s unknown if these are final stats which fans can expect to see in game; they could merely be placeholders, and could certainly be subject to change. Nowhere in the stats, however, does Fallout 76 mention whether players can actually play the Guitar Sword. 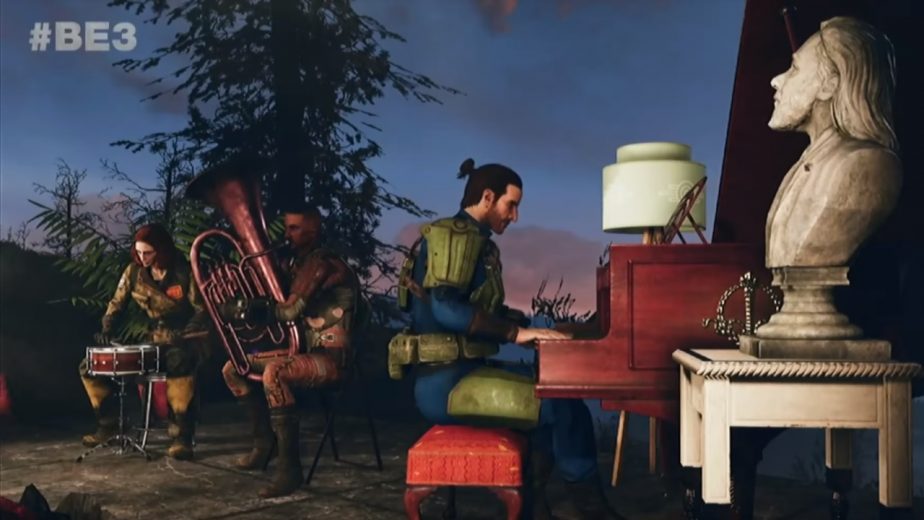 One major change to Fallout 76 was the complete revision of the Charisma S.P.E.C.I.A.L. attribute. Without human NPCs to interact with, much of that attribute would be useless in Fallout 76. According to developers, Charisma is now principally concerned with teamwork effects; providing bonuses and abilities to one’s teammates during play. Perhaps the Guitar Sword could have some utility here, either in conjunction with a Charisma ability, or to gain a bonus to Charisma. Maybe there’s even a Charisma Perk Card which grants bonus damage using instrument-weapons! Whatever the case, players will probably have to wait until at least the open beta before finding out for sure. The inclusion does beg one other question though; if there is a Level 15 Guitar Sword, are there other, better kinds of instrument-weapons included in Fallout 76?