Fallout 76 players have discovered a bizarre new bug that surely fits Bethesda’s definition of “spectacular“; one which causes you to turn into a creepily-elongated and naked figure if you try to equip or store power armour. The Fallout 76 bug can be game-breaking, and Bethesda has yet to respond to the problem.

The bug has been present in the game since the Fallout 76 BETA; something I can confirm, as I actually encountered a player suffering from it myself while playing last week. At the time, I wasn’t sure what to make of the player’s bizarre appearance; I thought it was a one-off glitch. As it turns out, players have begun to report this happening in droves now that the game has been released. Unfortunately, this Fallout 76 bug is clearly not an isolated incident. 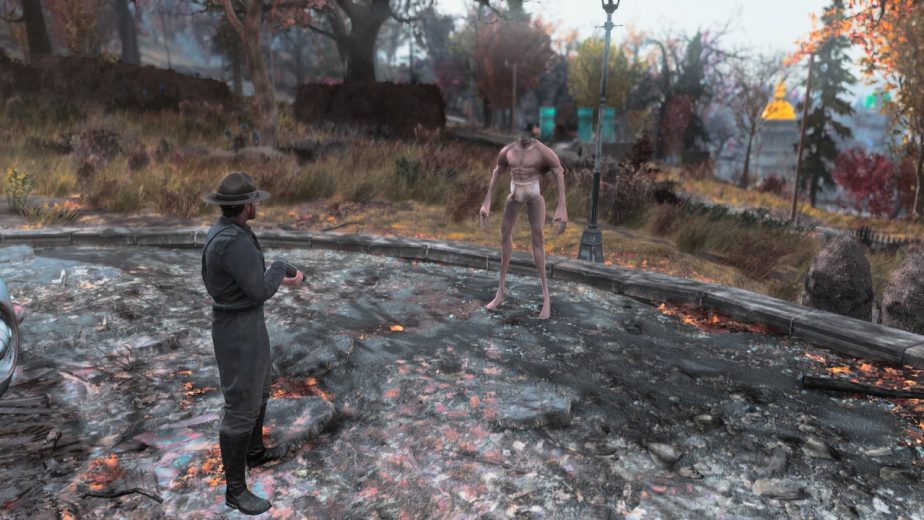 According to reports, which have emerged on both Reddit and Twitter, the bug occurs when players don or store power armour. It causes the player’s character model to freeze and elongate out of proportions, often appearing without clothes. Some players report that they also turn invisible underneath their power armour when they put it on in this form; another part of the glitch I can personally attest to. The unfortunate player I saw during the BETA was able to don their power armour. However, as each piece was put on, the body part underneath became invisible. Because the character model was so elongated, the invisible gaps were obvious between the armour. (You can see evidence of this in the screenshot above.)

This Fallout 76 bug appears to vary somewhat between cases. Some people were able to keep their clothing on, but only when wearing certain clothes. Some users report being stuck in this form for hours at a time; because Fallout 76 is entirely server-dependent, they can’t simply reload an old save. Many players report that they are unable to remove their power armour in this state too. Some are theorising that it occurs when network problems strike as a player is entering power armour, but Bethesda hasn’t given an official clarification as of yet.