Ubisoft has released a Title Update for Far Cry 5 before each major DLC release, and Title Update 10 is a continuation of that pattern. The final announced DLC, Dead Living Zombies, is scheduled to be released tomorrow. While this Title Update adds the last remaining DLC assets to the game’s Arcade Mode, it goes much further than a typical Title Update. The majority of the update consists of bug fixes, but it also adds new masks and special outfits for players to use in Hope County. The full patch notes are available online. The two headline features of the update, however, are the Far Cry 5 New Game Plus mode and the new “Infamous” difficulty setting. 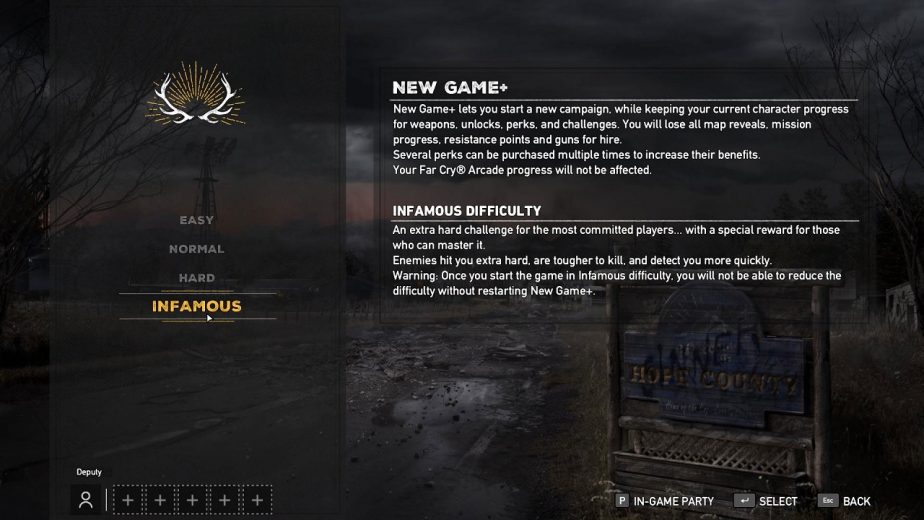 Far Cry 5’s “New Game+” mode lets players start the game over with their current character progress. Specifically, that includes “weapons, unlocks, perks, and challenges”. Players will not keep absolutely everything, however. As the game states; “You will lose all map reveals, mission progress, resistance points, and guns for hire”. The mode changes some of the game’s perks to allow players to purchase them multiple times, thus increasing the benefits they provide. Note that the mode does not affect your Arcade progress.

The second new addition is a new difficulty level called “Infamous”, which is only unlocked once players start New Game+. The Infamous setting makes the game harder than its hardest current difficulty option; “Enemies hit you extra hard,” states the in-game description; “are tougher to kill, and detect you more quickly”. However, the mode hints at a “special reward” for players who manage to complete it. The mode also warns players; “Once you start the game in Infamous difficulty, you will not be able to reduce the difficulty without restarting New Game+.”