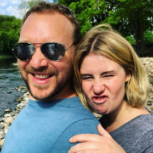 One game you never played and really, really, wished you did?