If you’ve ever pondered the question: “What if goblins played sports?” then it seems 3D Realms and developer Goin’ Yumbo and their new game Graveball has the answer. Given goblins are probably less known for their great sportsmanship, and more for their immense bloodthirst, it should come as no surprise they play it with clubs, massive bones, whatever blunt or sharp weapon they can get their hands on. And of course, the ball is a skull. Go figure.

There isn’t much of a story to Graveball, if any, other than that goblins apparently love getting together at cemeteries to play their own version of rugby. Gameplay in Graveball is fairly simple and if you’re at all familiar with rugby or handball, it shouldn’t be too hard to grasp. Two opposing teams of 3 goblins each face each other in matches where the ultimate goal is to get the skull into the opposing team’s goal zone. When the skull lands in the zone, it will start counting down. Unless the ball is moved, it will eventually explode, upon which the scoring team wins. The team that gets the most goals until the timer reaches zero wins the match. 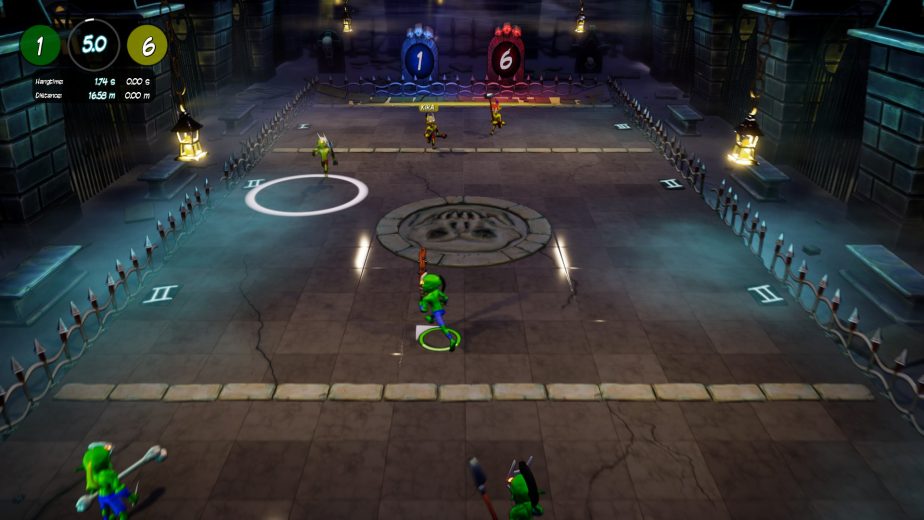 There are of course some quirks to this game that makes it a bit more interesting. As you can tell from the screenshot above, there are quite a few weapons to use and these are what makes Graveball more of an action sports game. Because you can just kill the crap out of your opponents to keep them from getting the skull into your goal, using any weapons you find laying around. You can also toss your weapons at your opponents, which will leave you unarmed until you can find a new one, but can be immensely satisfying if you manage to hit an opponent on the other end of the field.

Another aspect to the gameplay is that when you get killed, you are dead for 5 seconds until you respawn as a ghost. In this form you cannot interact with the playing field and still count as dead but you have access to a unique weapon in this form, being the scythe, which you can grab and then respawn as a goblin to use as a weapon. If all of your team are turned into ghosts however, the match ends, so even if you are respawned, keep in mind it’s not a safety net.

There’s a lot of customization options you can use for your player character too, such as custom hairstyles, masks and taunts which adds flavour to the game. You unlock these by earning gold in matchmaking, so there’s a lot of incentive to keep playing. One thing I’m not a huge fan of is that what you unlock is always randomized, so there’s no way of previewing a hairstyle for instance and purchasing it, it’s always a bit of a crapshoot what you’ll get. I prefer being able to pick what to customize my character with personally. And it’s not like I want to stop unlocking things to customize with either, I just would prefer that freedom. 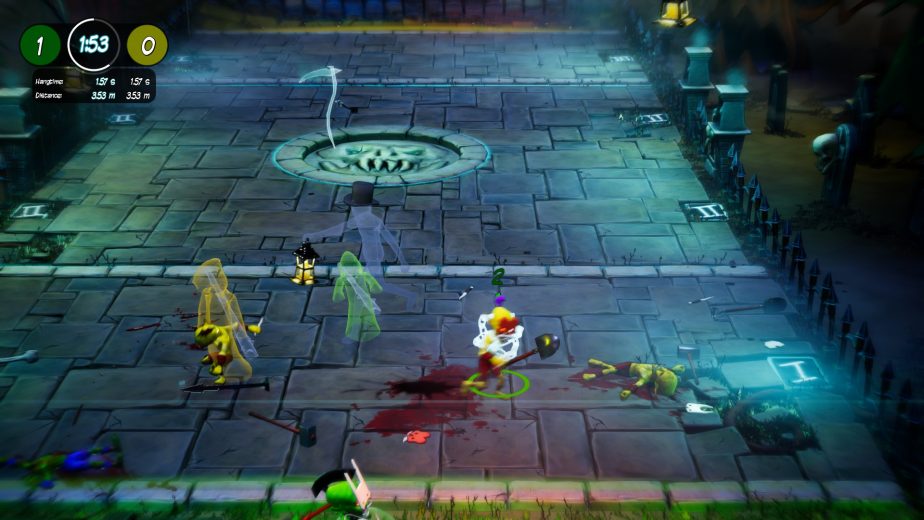 Graphically the game looks alright. It uses the Unreal engine, which always looks excellent, so there’s plenty of neat effects going on. I did run into some slight performance issues on my copy, so optimization might still not be 100% there, but all things considered it ran and looked great on medium settings for me. How the game runs might depend on your PC since mine is starting to get a bit old at this point.

I of course have to mention the music by Brian Brennan who did a pretty great soundtrack. It’s sort of synthwave with a classic horror twist that perfectly builds up the mood and atmosphere in the game while also providing some driving music for the gameplay. The voice acting is also hilarious, with the goblins speaking entirely in grunts and garbled speech. I also love the punchy sound effects when using the weapons. All around the sound isn’t stellar but it definitely works.

And while that is really all there is to this game, it makes for some great fun. You can either play solo against bots, create custom matches and invite friends to play, or create a party and join an existing match through matchmaking. Unfortunately it seems the playerbase at this point is kind of non-existent, which is understandable given the game just launched but I really hope that more people will get this game. Because it is stupidly fun at times, especially during those unforgetable moments where you just landed a goal and can still kill someone of the opposing team just to rub salt into that already deliciously fresh wound. And since the game is like $5 at the moment on Steam, with a console release coming later, I see no reason not to grab this game. It’s not any deep or massive game, but it’s definitely a worthwhile game to play with friends for short periods.