MLB The Show 19 predictions are a hot topic. With Sony running a series of live streams about the latest release, gamers are ready for action! March is just one week away and preseason baseball has arrived.  Before we know it, the Boys of Summer will back on the field and all of the MLB The Show 19 action will officially be underway.

The Show 19 predictions Third Base

With just 30 days to go until the latest version arrives, MLB The Show 19 predictions have chat rooms buzzing. A new season always brings surprises. That is always evident when you look back at the previous season’s ratings.

Thirty days until the launch of #MLBTheShow 19!

Last year at this time, New York Yankees rising star  Miguel Andujar and Atlanta’s Johan Camargo were not household names. This season they are. Both have cracked the top ten in the early MLB The Show 19 predictions for third basemen.

Another “out of the blue”  third baseman was Oakland’s Matt Chapman. Chapman was a pleasant surprise for the A’s as they put together an incredible 2018 season.

If they stay healthy, all three of these youngsters are going to be special for a long time in the big leagues. 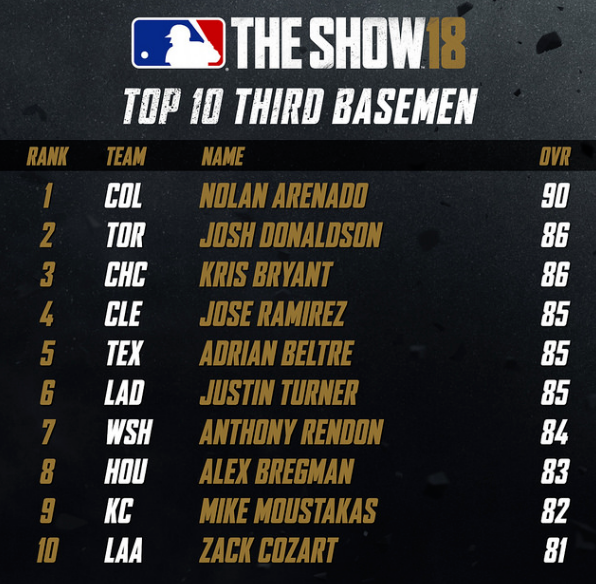 Last season MLB The Show had Randon seventh overall with a rating of 84. This year, he is my No. 1 as his rating jumps to 89. After his last two seasons, Rendon deserves the nod at No. 1. In 2018 Randon hit .308, which was highest for all third basemen. He also smashed 24 home runs while driving in 92 RBI.

Miguel Andujar and Nolan Arenado tied for second on the early prediction list at 87. Below is a look at the rest of the top ten MLB The Show 19 predictions for the best third baseman in the game today.

As always, please be sure to check out our MLB The Show home page to keep up with all the latest news, trends, rumors and information by clicking here!