The NBA 2K League is just over a month away, with the 2019 season ready to start. Just recently, the latest schedule information became available. The anticipated eSports league featuring the 2K Sports basketball title will officially tip off in early April and run through early August. That’s when the finals will take place to crown the 2019 season champion. Here are more details on the upcoming NBA 2K League schedule and format.

A total of 21 different NBA 2K League teams are ready to go. On Monday (Feb. 25), the 2K League posted the official details and schedule for their upcoming competition. It all begins with the 2K League’s “The Tipoff” slated for April 2 through April 6. Four weeks of competition follow that and will end on May 3. “The Turn” is scheduled for May 9 through May 11. After four more weeks, it’s time for “The Ticket” on June 13 through 15th. Two more weeks lead to a Bye Week in early July.

As of July 17 through 19, the NBA 2K League Playoffs matchups will be established. Those NBA 2K League playoff battles start on July 24 and end July 26. The official NBA 2K League Finals are on August 3, as shown in the schedule graphic below. 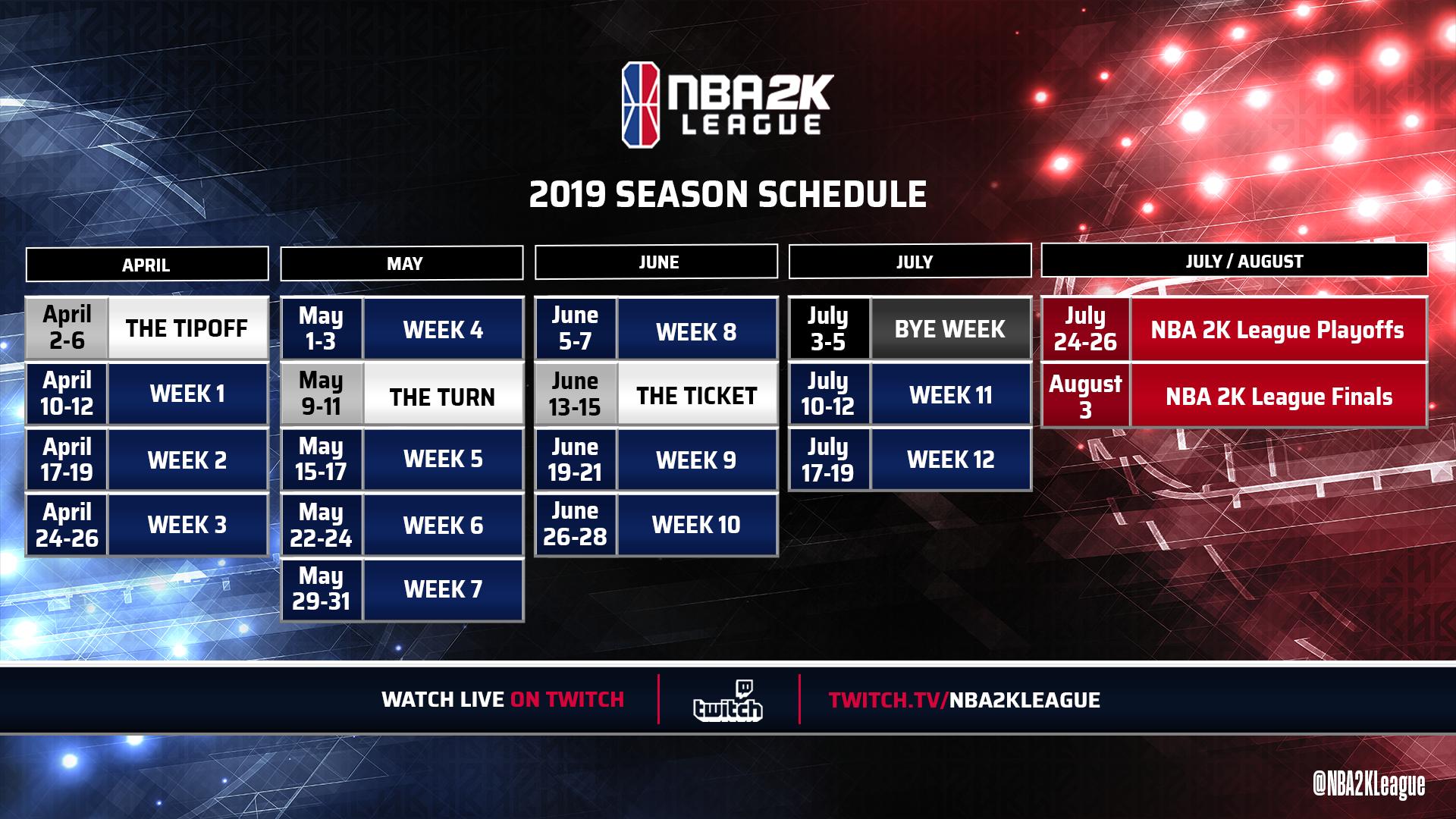 For those wondering, “The Tipoff,” “The Turn,” and “The Ticket” are the three in-season tournaments that will be part of 2K League’s 2019 season. Winning teams will win portions of a total $1.2 million in prize money. The results of these individual tournaments won’t count towards teams’ regular season record, though. Those records are compiled over the 16-week season. However, if teams need a tiebreaker with their records, the tournament results will be the deciding factor.

Eight teams qualify for the NBA 2K League Playoffs which officially begin on Wednesday, July 24. The seven teams with the best record and the winner of “The Ticket” tournament will all qualify. If that tournament-winning team has a top-eight record in the league, then it will be the top eight teams in the playoffs.

Fans are able to watch all of the action play out thanks to the free live streaming coverage on Twitch. The official NBA 2K League Twitch channel will provide those live streams for viewers online.

The inaugural NBA 2K League started as of early May last year. Since then, the league has looked to expand with international competitions to find the best potential gamers. One of the most recent was the 2K League’s APAC Invitational held in Hong Kong. Through practice, interviews, competition, and scout assessments, 2K League personnel determined eligible gamers for the 2K League draft.

The 2K League revealed video footage with highlights from the big event in February.

The NBA 2K League Draft officially takes place on March 5 at 5 p.m. with live coverage also available on 2K League’s Twitch channel. It will the best of the best 2K gamers from the recent talent pool selected for competitive teams ahead of the 2019 season in early April. See more details about 2K League teams here.

Get more of the latest news, information, and how-to guides for the game over at our NBA 2K page.