In 2013, Eidos decided it was time to completely reboot the Tomb Raider franchise, with the aptly titled “Tomb Raider”, a complete reimagining of the franchise, offering a Lara Croft that we had never seen before. She was more human, more fragile, and taken to a different place than she previously had, a stark contrast to the kind of over the top action heroine she had been in the past. It made for a more interesting story, a story in which she would grow with the player, getting tougher as she gained more experience, ending on an iconic shot of Lara wielding two pistols after having beaten the final boss of the previous game.

It seems a no-brainer that after the success of the reboot, which received almost universal acclaim, the same team would work on a sequel. And 3 years later, in 2016, we received “Rise Of The Tomb Raider”, the next chapter of the Tomb Raider saga. Despite being 2 years since its release already, during which I have been playing the game on and off, I want to give my own personal opinion on this game given I already reviewed the original at my blog in 2013 and absolutely loved it. 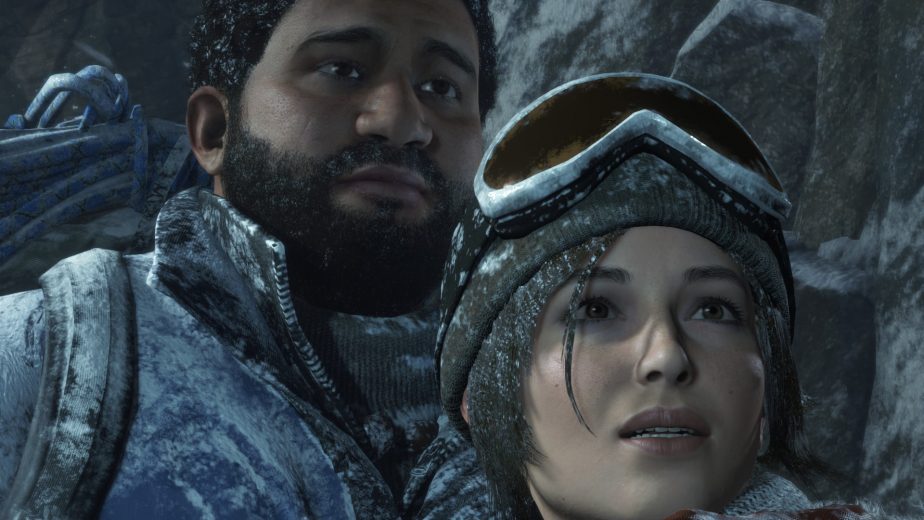 The story of Rise is more of a personal story with Lara following in her father’s footsteps, looking for an ancient artifact in Siberia, that allegedly contains the “Divine Source”, the fountain of youth itself. Her father was on the trail for it, but died before he could finish his work, which is where Lara decides to pick up. Hunted by an ancient group called Trinity, she travels to Siberia in search of an ancient city known as Kitezh to find the Divine Source before they do. A journey which takes her through the Siberian wilderness, cold war installations and a valley where she meets the indigenous people, who she has to work with in order to find a way to stop Trinity from getting their hands on the Divine Source.

The story is told through amazing acting, both in terms of the animation and voice acting, which is absolutely stellar. The game does a great job feeling like a true cinematic experience, going back and forth between flashbacks and current events and utilizing the gameplay to also relay backstory to the player through artifacts which can be picked up and read or inspected to reveal little stories from ancient times. Throughout the game, Trinity remains a constant threat, and it becomes your main task to survive long enough to not only stop them but also clearing your father’s name who was labeled a lunatic for his discoveries. 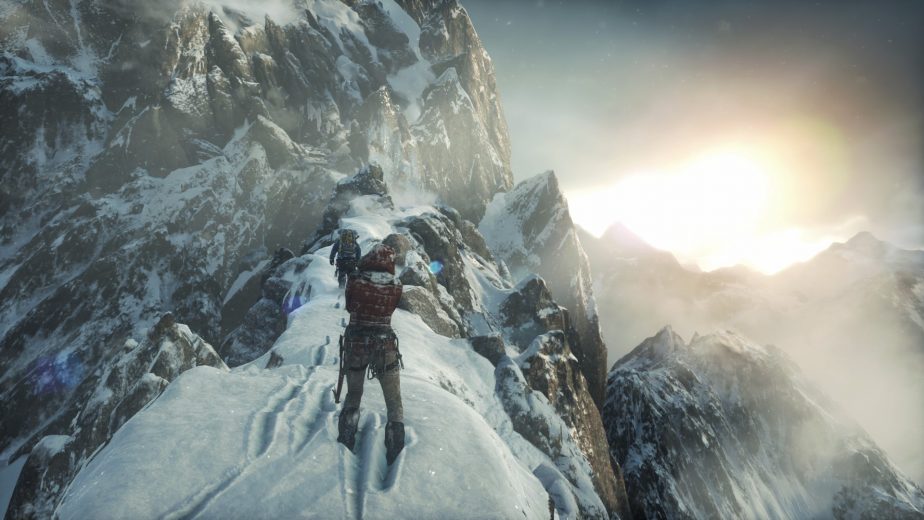 The gameplay in Rise largely follows the same mechanics from Tomb Raider. Moving around the environment is often done through climbing, scaling walls and all that good stuff. A lot of focus is put on survival and using your environment to aid you. Resources can be gathered around you to upgrade your weapons and craft inventory items such as ammunition and healing kits. Whether you are hunting animals for pelts, picking mushrooms or gathering wood, your environment is your best friend in this game. Campfires serve as spots where you can fast travel between places in the game, craft items and upgrade your equipment and skills.

The combat also remains largely the same, with Lara being able to carry 4 weapons in her inventory at any given time (which can be swapped out and upgraded at campfires). Lara can automatically take cover behind stuff and in addition to shooting enemies can also engage in melee combat, where you can dodge your enemy’s attacks while also landing attacks on them. Ammunition is scarce though, so often the best course of action is to either avoid combat if possible or use stealth. 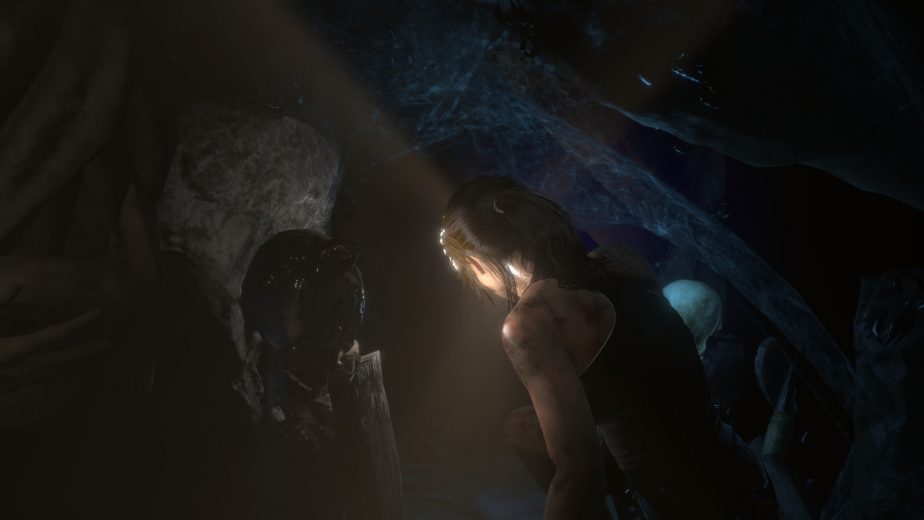 Lara will usually (unless the story calls for otherwise) approach any enemy group already in stealth and it is up to the player if you want to break stealth or maintain it. Maintaining stealth is usually more rewarding as it conserves on ammunition and lets you stay more in control of things. Picking enemies out one by one without being seen and ensuring their bodies aren’t discovered is essential to keeping stealth and on higher difficulties, this becomes crucial as enemies will deal a lot more damage to Lara. The environment is typically also offering plenty of opportunities to remain hidden so using your environment to your advantage is another crucial element to survival in Rise.

The controls can be a bit confusing at times. While largely intuitive, during quicktime events and button prompts it can often catch you a bit by surprise if you’re not expecting it and lead to an unfortunate death because you didn’t time a button press correctly or pressed the wrong button. Granted it’s a huge improvement over the previous game where quicktime events were a much bigger problem and button presses felt almost entirely random, but it’s still a bit of a pain to deal with. 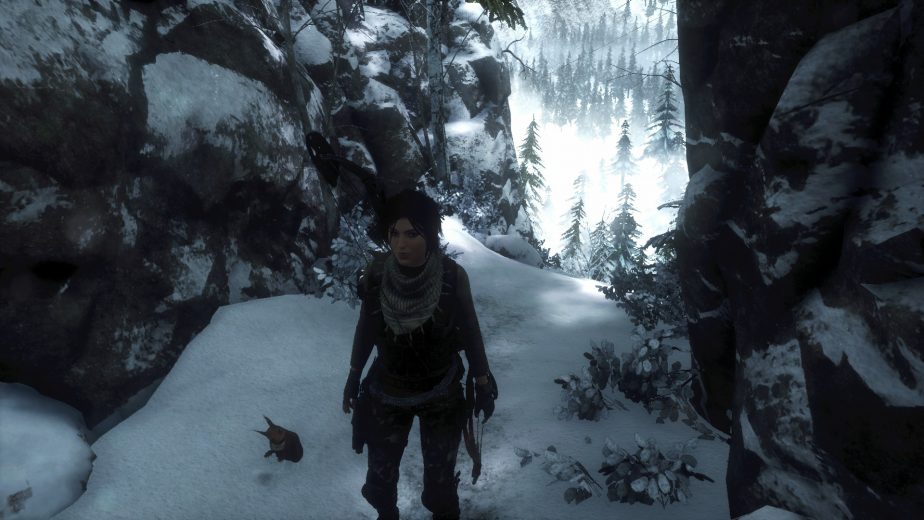 Another element of the game is exploration. As opposed to the previous Tomb Raider, in this game there are a LOT more actual tombs to raid, and they’re usually hidden from the main path. Each tomb provides a unique puzzle to solve with a pretty high reward for solving them. There are also a lot of other perks to exploring the environment in Rise, such as coin caches to find, hidden pieces of lore and so on. If you truly wanna 100% complete the game, you are looking at a lot of hours spent searching every nook and cranny of the game to find all it has to offer. After my first completed game I was left with only 86% completion, and that was after a whole 2 years of playing the game on and off with a solid 20 hours of actual game time. So if you’re a completionist, you’re definitely looking at a pretty substantial amount of game time, even though the story itself can probably be completed much quicker than that.

In addition to the main story campaign, the game has some additional challenges to play through in the form of the Expeditions mode. Here you can use cards to grant additional buffs during the gameplay. You can do Score Attack, where you are trying to get the best time while also going for objectives that grant you a better score. You can beat an earlier chapter in Chapter Replay, faced with additional challenges such as completing it without dying. Expeditions is also where you can play additional DLC levels for some extra content after completing the main game, similar to the DLC missions in Deus Ex: Mankind Divided. 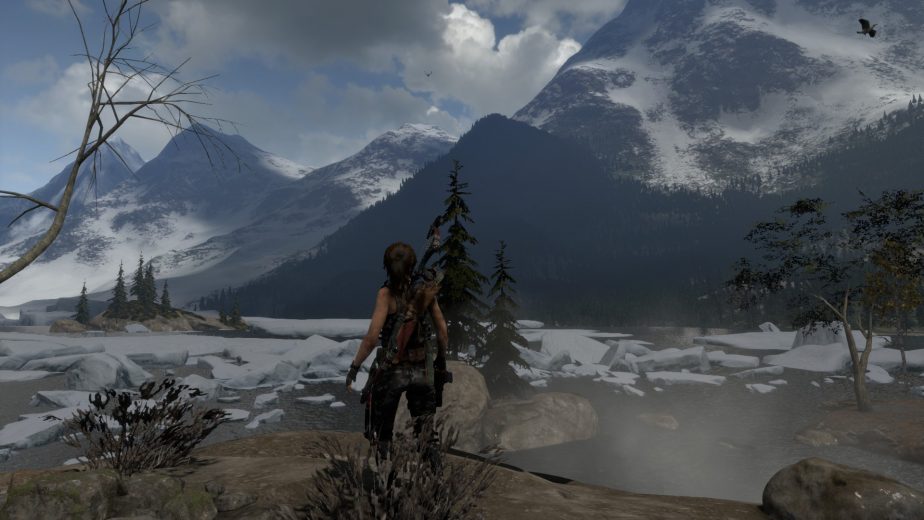 Rise offers far more arctic conditions than Tomb Raider did, with its setting being the cold mountains of Siberia. While Tomb Raider had more of a tropical island feel to it, Rise offers more mountain areas and cold conditions, which helps set it apart from its predecessor and gives it a feel of its own. Everything is rendered with an incredible attention to detail, such as Lara’s facial expression during moments of the game and animals limping after being shot. Your feet will leave realistic trails in the snow, sunlight will break up very realistically through snow and clouds. And the mountains and valleys are rendered beautifully in the background, giving the game a gorgeous world to explore. The facial animations are also something to behold with very realistic expressions that almost head into uncanny valley territory, but like the latest Call of Duty games somehow actually manages to go past that due to some tasteful style choices. You also have a variety of outfits to choose from with more being available as DLC, so if you’re not happy with Lara’s clothing, just change it.

As previously mentioned the voice acting is superb. The entire cast is giving a stellar performance here, especially Lara’s voice actress who definitely sells her role of being a young adventurer often ending up in harsh situations yet surviving them through sheer will. The rest of the sound design is packed to the brim with realistic animal sounds, as well as lush environmental sounds such as weather and water flowing. Weapons sound realistic as well, but still sounding satisfying to use, especially using the pickaxe for melee attacks which always have a brutal crunch to them. As with the previous game the musical score is sadly largely forgetable background music, which makes sense given the game’s cinematic focus but compared to the classic games that had memorable themes, it feels too forgetable to be noteworthy. It feels more functional than memorable, largely just being there to build up the atmosphere than doing anything else. It makes me miss the classic themes from the older games for sure, especially when they weren’t afraid to mix in some techno and classical music, which is something I feel has been lost with the newer games. 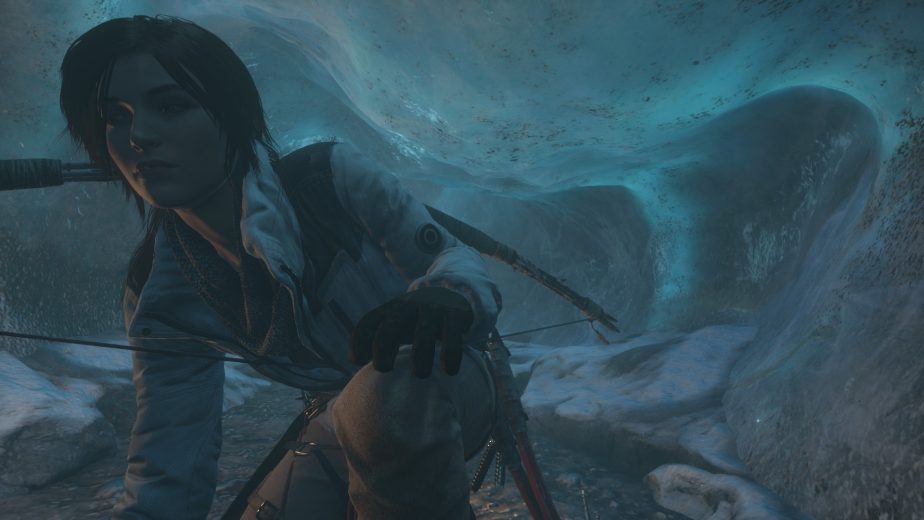 All in all, Rise Of The Tomb Raider is a great game. The story feels more personal and thus the stakes feel much higher than the previous games, dealing with themes of Croft cleansing her family name and living up to her father’s expectations. It feels like a story where Lara is dealing with her past in order to leave it behind her and thus feels very important to her. Gameplay wise it improves a lot on its predecessor without taking anything away that shouldn’t be, and it’s an absolutely gorgeous game to behold, even on the lowest settings. And with its sequel coming later this year, now is as good a time as any to give Rise Of The Tomb Raider a playthrough.