After a very long wait and tons of hype for fans, Old School RuneScape Mobile has arrived. For the first time ever, the beloved and groundbreaking MMORPG has made the leap from computers to another platform. Releasing on mobile devices (both Android and iOS) is an interesting decision. So, how does the game hold up on mobile?

I’m not going to waste much time going into the basics of Old School RuneScape Mobile. It’s one of the most influential free to play MMO’s ever to release and for good reason. It shies away from unnecessary fluff – both visual and gameplay-wise – for a straightforward experience. The same can be said for its mobile incarnation. If you know the PC version, you know the mobile version, too.

Every single thing is there right down to the fact that you are playing alongside PC players on the same worlds that you already know. You can fight, farm materials, chop trees, fish, do quests, chat with strangers for hours on end, and do a myriad of activities just like you have before. Better yet, your account transfers over seamlessly.

Booting up Old School RuneScape Mobile simply had me login like I’ve done 100 times before on PC. Visually, this is the exact same game you know. While not necessarily a huge feat, it is reassuring that it looks exactly how it should on mobile. In my case, I was playing on a low-end Android device but iOS works fine, too, from my time with it.

Considering my cheap phone isn’t even able to play some newer mobile games, it is reassuring that a wide range of devices are compatible. The best part is that it feels pretty much the same, too. Technically, I had little to no issues scouring the world for adventure. There would be the occasional slowdown when traveling for long periods of time while the rest of the world loads but not much more than on computers.

Additionally, even after a few weeks of frequent play, I had two disconnections in total. While I’m not entirely sure what exactly led to being disconnected (internet was doing fine), they were thankfully rare. I never felt like I had to worry about drops and lag. I also never felt like PC players had any advantage over me.

Admittedly, a large portion of my time playing was spent in short bursts. I would farm wood or ore for a few minutes, sell them at the Grand Exchange, and then log out for a bit. Despite being on a mobile device, RuneScape Mobile never let me down. I didn’t ever feel like PC players had an advantage over me when it came to whacking a tree first.

This is in large part due to the smart controls. As you can see in screenshots, the entirety of the UI is pretty unchanged. The same icons and tabs are available even if they have been moved around the screen a bit. As you would expect, the controls revolve around using solely touch controls.

The touchscreen works as a good alternative to the traditional mouse. You can swivel the camera around like in other mobile games to get the best angle. A single finger press works as the left mouse button, immediately selecting the default action like walking there and so on. However, holding down your finger brings all of the options like deposit X number of ore.

As someone who primarily uses the minimap to walk, I was happy to find that tapping where you want to go on the minimap works exactly the same. However, it’s in maneuvering through the game world that Old School RuneScape Mobile has its biggest issue. You are limited to your device’s screen size.

I have a pretty standard screen size and it worked most of the time but there were plenty of instances where I would tap and it would put the marker on the other side of a building and so on. It is finicky to deal with but can be thankfully fixed easily. As a whole, though, Jagex has done a marvelous job bringing the entire experience on the go.

Sitting on my commute while I sold goods and chatted with friends never gets old. RuneScape was always a game that I would play for short bursts in class or at home so having the entire game on a device that emphasizes that makes perfect sense. If I needed to do something, I could just do it.

When I logged into a world where too many people were farming the same spot, I sighed when I realized I needed to switch to another world. This was because I immediately thought it would be a pain to figure out on Old School RuneScape Mobile. However, it was as simple as opening up the same tab as I did every time before on my computer. The UI is smartly split up where you tap one tab to open it and tap it again to close it.

My only issue with the UI is the chat screen. Having it in the top left corner is still something that I’m not used to. It certainly takes up a good portion of the screen and it got particularly annoying when trying to select something northwest of my current location. Thankfully, it’s easy (but not well-explained) to minimize but still an odd choice. 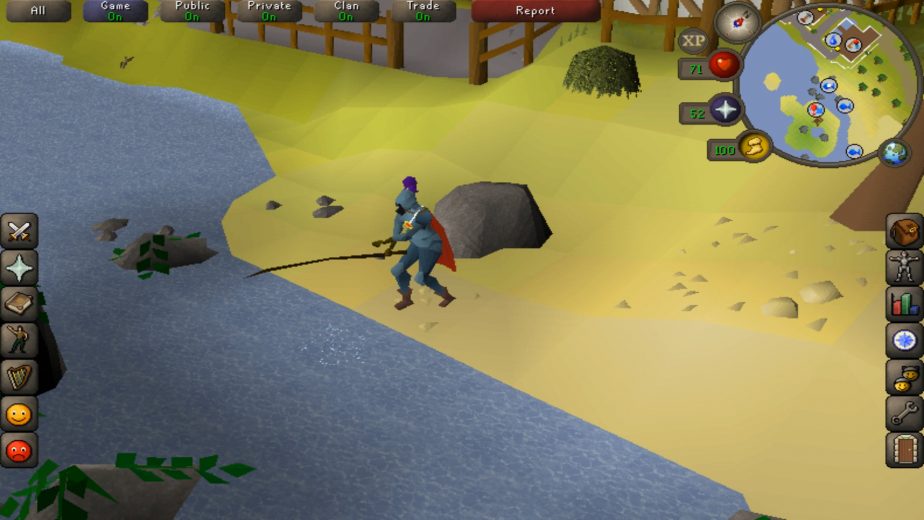 Overall, Old School RuneScape Mobile is the same game that you know and love. It runs, looks, and feels just like the same game you’ve played on PC. As someone who has been with this game off and on for 12 years, it feels like this is the exact evolution that the MMO has always needed. The way that I’ve always played the game (typically in bursts) feels right at home on my phone and is a great way to pass the time on the go.

This review was done with a complimentary membership code provided by the publisher. We are grateful for their continued support.