3D Realms are probably best known for their action titles. With games such as the Duke Nukem series, Wolfenstein 3D, Commander Keen, Max Payne and the recent FPS Ion Maiden in their catalogue, it’s kind of easy to miss that some of the early 3D Realms/Apogee games often explored other genres as well. And with the recent releases of Graveball and this game, it seems that 3D Realms are doing just what they did in the past. Picking up talented developers making fun games in all genres, and giving them some attention. ZIQ is by no means an action shooter like a lot of 3DR’s library, but it does still fit in, in its own quirky way. Let’s find out exactly how ZIQ can be called a 3D Realms title. 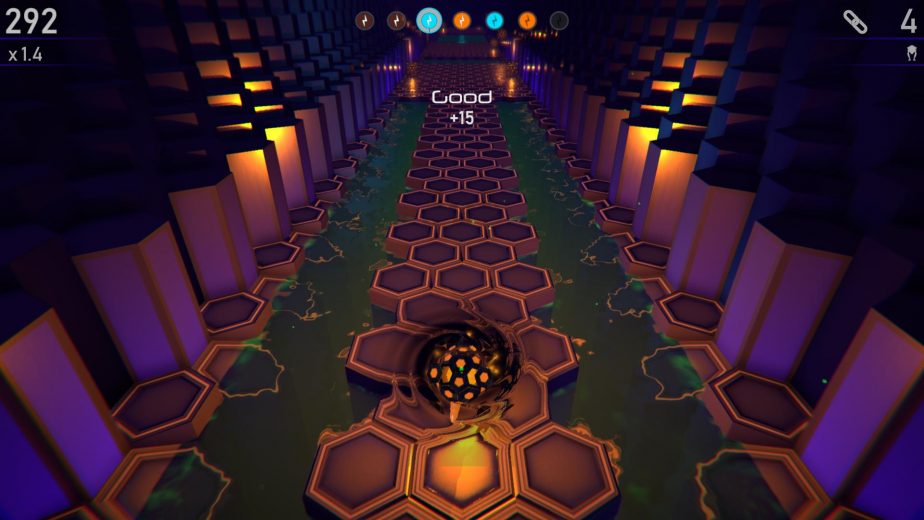 ZIQ is straight up an arcade game. While there has been confirmed to be a definitive end to the experience by the creators, the goal is still to attain the highest score possible and rise up the leaderboards. You of course do this by accumulating points through gathering orbs on a track, avoiding obstacles along the way. The caveat is that you need to gather the orbs in a set sequence of two colors, orange and cyan. Once you’ve gathered one the sequence will count down before it resets until you get the next one, but the timer is fairly slow.

The good news is that you yourself control the color of the orbs around you, with being able to switch the color of your runner on the fly. And thus you have full control over gathering the right colors in the sequence. The bad news is that the obstacles require you to be a certain color to pass through them as well, meaning you have to both focus on which color the orbs are, and which color your runner is when passing through an obstacle. It creates some very tense gameplay situations that require a lot of focus.

You basically have 3 lanes on the path you run, at times you are required to stick to one field when there’s a pool of acid on one side or either side. Pressing left on the controller moves you to the left lane, pressing right moves you to the right lane and not pressing any direction keeps you in the center lane. You can also jump to avoid acid pits or certain obstacles. As has been described by one of my friends, it can be difficult adjusting to the control scheme and I have to admit in the beginning it took a while to adjust to it, but it’s something you do get used to after a while. 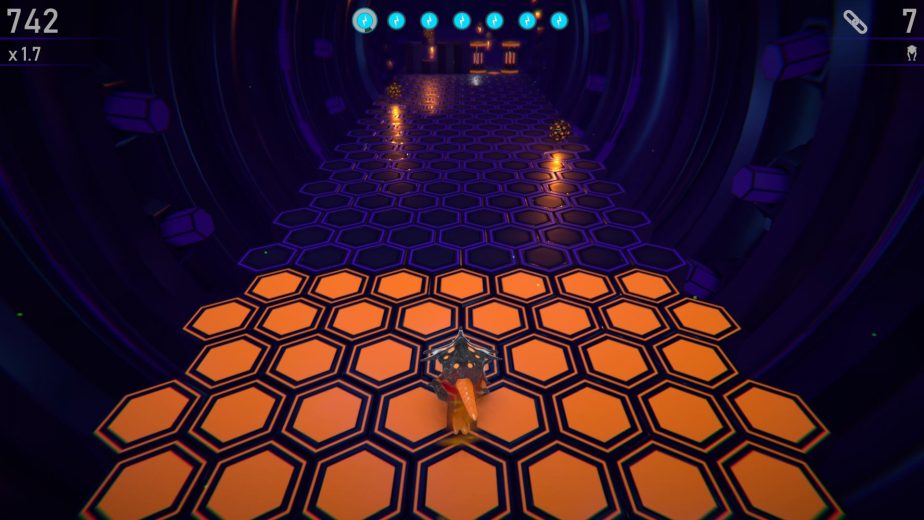 There is an exception to the color rule however. If you have completed enough sequences in a row, you get supercharged for a brief period, in which you can blast through obstacles at the opposite color and gain a destruction bonus to your score. But you also run faster making you have to react quicker to obstacles and orbs which is the tradeoff for increased power. The game does a pretty good job of rewarding skilled players while punishing players for failing, and also having a voice that berates you when you do badly, and sarcastically praises you when you’re doing well. It makes you kinda want to punch the guy, but also kinda makes you want to prove to him you’re good, so I suppose it works as intended. Of course, from his perspective I can kinda see why he’s gotten so rough, seeing an infinite amount of runner clones fail again and again.

The game is very good at not being too punishing though. If you die, you do not reset to the beginning but continue where you left off. And if you fail a sequence you instantly get started on a new one. You of course lose your chance at getting supercharged but you’re not terribly punished for it. However once all of your extra lives are spent, it’s game over and you’re presented with a leaderboard showing your final score and given the opportunity to retry from the beginning. But all in all I feel the difficulty curve is just right and I would consider it a hard game, but not unfairly so. 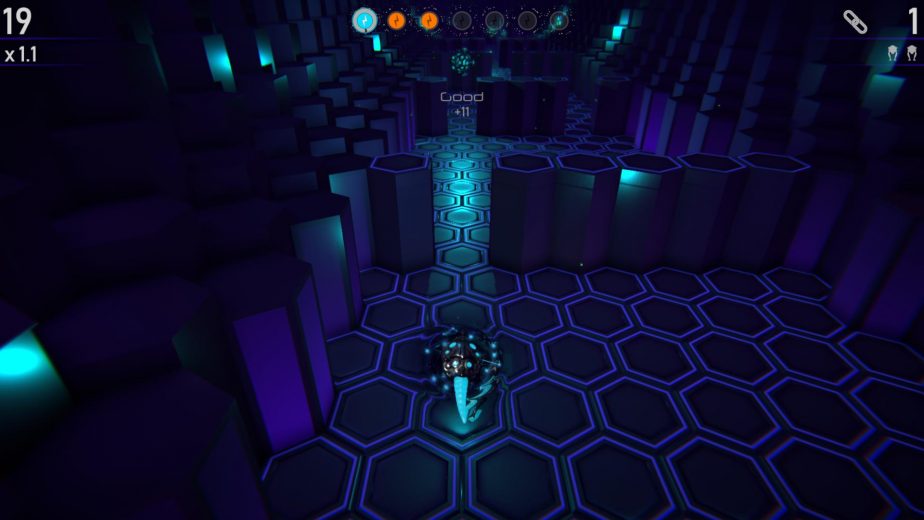 Graphically the game looks pretty good for an indie title. I would probably personally like if the path wasn’t constantly straight forward but maybe had turns and loops, more akin to a racing game. It probably wouldn’t impact the gameplay any differently but would give you more of a sense of not just going forward but also following a path. And some variation on the things around you could also add some flair to the game. The game looks a bit boring and uniform at times, and staring at the same walls, the same patterns and the same structures over and over does get a bit repetitive. But the graphics serve the gameplay and it looks alright, especially for the cheap price the game asks. The game is made in the Unity engine and I’ve definitely seen worse come from it.

The sound is probably the game’s strong point. It features a really nice synthwave score with some trap elements, perfectly fitting the game’s futuristic sci-fi aesthetic. I also love the voice actor who plays the overseer creature. While I do want to punch him at times for being such a dick, it really helps edge you on to do better. The sound design in general is pretty good though I noticed that if I turn the volume down, some sounds still play at max volume, which I think should be fixed in a future patch. 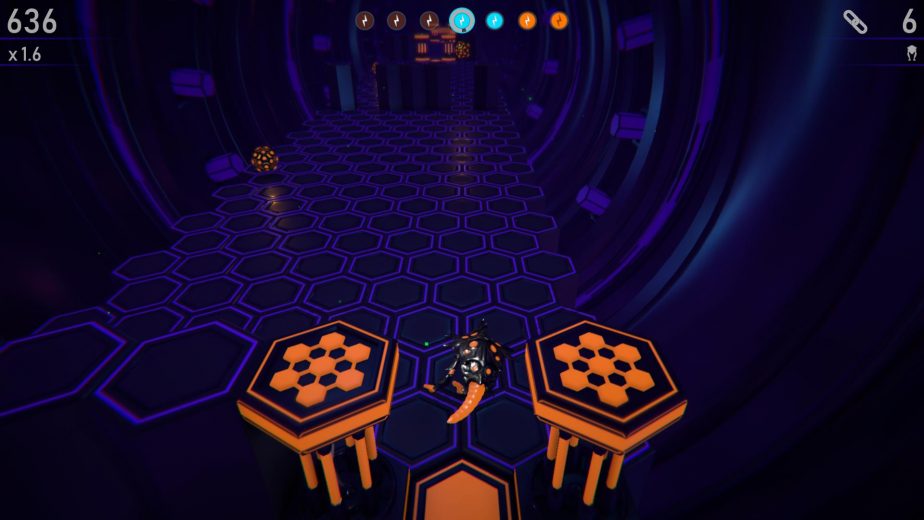 All in all, ZIQ is a really addictive arcade runner. The price is also really nice, being around $10 on Steam right now. There’s also already a pretty competitive community surrounding the game, giving you plenty of competition when getting high scores. I definitely recommend ZIQ if you are into these type of games, though ZIQ is anything but casual, giving you a bit of a learning curve before you can dent the leaderboards.