Bioware’s Anthem was the star of EA’s conference, EA Play, that was unveiled last Saturday. Not only was the beginning of the conference pretty awesome, but the newest trailer and gameplay was met with excitement from the audience too. When Bioware’s Casey Hudson, Cathleen Rootsaert and Mark Darrah took to the stage, we finally got some of these questions we’d been wondering answered. You can read more than a few of those answers here.

The basic gist of Anthem is that people will be playing characters known as Freelancers. Freelancers are individuals who must defend civilization against terrible disasters, such as an approaching storm and rivals called the Dominion. Players will pilot their javelins (also known as their exosuits) and be able to embark on a massive, fun adventure with friends in this open-world game.

Of course, there’s still a lot we don’t know about Anthem. But that’s alright, because what we do know? We’re more than willing to share with you guys reading VGR.

Anthem is an action, open-world role-playing game that is set in the futuristic world where humanity is close to collapse. Players will take on the role of Freelancers, who go on various missions where they interact with other players, gather resources and fight enemies such as The Dominion. The goal is to defend Anthem – but will you be able to do it?

Do I have to play co-op with people?

Certainly not. You can explore the world of Anthem completely by yourself, as confirmed by Bioware during EA Play.

Who are the Dominion?

The Dominion is a rival group who have one goal: turning the Anthem of Creation into one of the most powerful weapons in the world. Your goal is to stop them from creating that weapon and making sure their desire of an end of civilization is anything but a reality.

Because of multiplayer, does this mean there will be a lack of story?

Not at all. Bioware addressed this question during EA Play. Not only will there be a huge focus on narrative, but Casey Hudson also stated that Anthem will have weekly stories. More story for everyone!

What the hell is a Javelin?

Javelins are exosuits that players wear. Currently, there are four types of Javelins: the Ranger, Colossus, Interceptor, and Storm. Each suit allows you a different way to do combat, with various abilities that can be used for different purposes. However, if you’re worried that if you stick with one suit you’re stuck with it, don’t fret. Executive producer at Bioware, Mark Darrah, explained that players are not their suits – so you can switch suits up whenever you want.

What kind of enemies are there?

You can come across various enemies in Anthem. However, we only saw one type of creature in Anthem’s E3 demo, and this was a beast, which are known as Scars. Scars attacked Freelancers while they are on missions, and often linger outside of the human settlement, Fort Tarsis.

What kind of weapons can I use?

While there were no specifics, you can see in the E3 demo that there were obvious looking sci-fi guns, as well as grenades and other weapons players were able to equip during the mission. The Javelin Storm looks to also be able to use lightning to their advantage, hence the name.

Nope. Hudson specified that there would be no competitive play between you and other players. The game will only be PvE.

Alright, break it to me slowly: will there be loot boxes or in-game currency?

Players will be able to make in-game purchases, but only for cosmetic items. There will be no loot boxes in Anthem and nothing will be included to make the game pay-to-win. 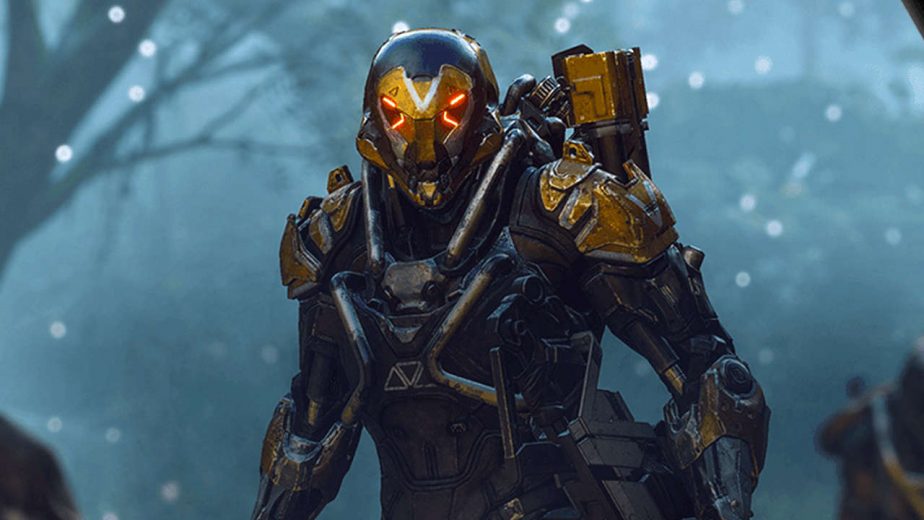 Okay, so can I romance anyone?

No my sweet Bioware fans, no you can’t. I’m disappointed too, but alas not every Bioware game has to have romance – this is one of those games. Mike Gamble, Anthem’s lead producer, recently told Game Informer that while there will be friendships, there will be no chance to smooch anyone. Don’t believe me, then you can have a direct quote from the man himself.

“There are no romances,” Gamble said. “There are friendships. Some of the stuff we did with Mass Effect — the Citadel DLC specifically — there was a lot of friendship moments. You and Garrus sitting up, shooting — that kind of stuff, we want to lean into that. The romantic stuff, we’re moving away from that for Anthem.”

Where is Dragon Age/Mass Effect?

Hudson has already stated that despite neither Mass Effect or Dragon Age appearing at E3 this year, the franchises are in good hands and will be seen sometime in the future.

What can I play Anthem on?

You can play Anthem on Xbox One, PlayStation 4 and Windows PC.

When is Anthem’s release date?