In the indie game scene, a lot of games take inspiration from the games of the past. Typically this comes in the form of tributes to oldschool consoles like the NES, SNES and Mega Drive. But it’s not often you see games that pay homage to the graphics of old IBM PC’s. The Eternal Castle, a supposed remake of a lost 1987 PC game, is such a game. And much in the vein of the game MURI, it acts as a tribute to old school PC games from the late 80’s and early 90’s. In this review we’ll be taking a look at this game and also discuss its legitimacy as a remaster. So strap in, it’s time to explore the CGA glory of The Eternal Castle. 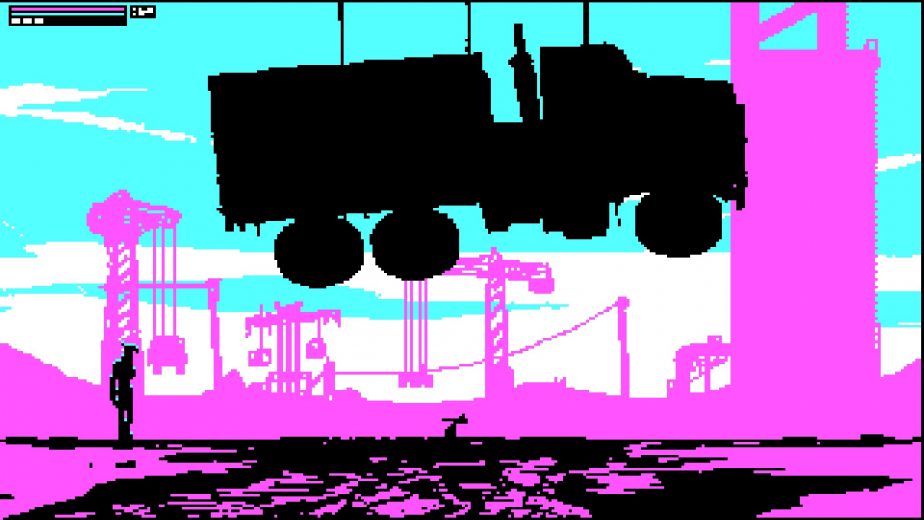 A lot of levels present traps that need to be avoided. Often you’ll end up learning it the hard way.

In Eternal Castle you can play as either Adam or Eve as you explore their dream on a post-apocalyptic Earth, in which they fight their way towards a malevolent AI. After a brief intro where you crash land into the region of the AI, your ship is damaged and loses its Gliders. In other words, you’re on a big ol’ fetch quest to get the Gliders back and repair your ship into working condition so you can assault the game’s namesake, the Eternal Castle head on. The plot feels strangely reminiscent of id Software’s classic Commander Keen: Marooned On Mars, where you also crash landed on a planet and had to get parts for your ship back. Of course, the plot itself is not terribly original either, but feels suitably cyberpunk for a late 80’s game.

The gliders have ended up in 4 separate locations, all of which serve as levels to explore before the final showdown. Granted while the game only has five levels including the final one, the levels are generally quite large and require a lot of exploration, and not to mention trial and error, before you can get through them. The first location is the one you explore after your ship has crashed. It consists largely of industrial landscapes and serve as a tutorial level to get you familiar with the game’s controls and mechanics. After completing it you have 3 choices of where to go next. The main goal is to gather Gliders for your ship as well as fragments that have scattered across the region. 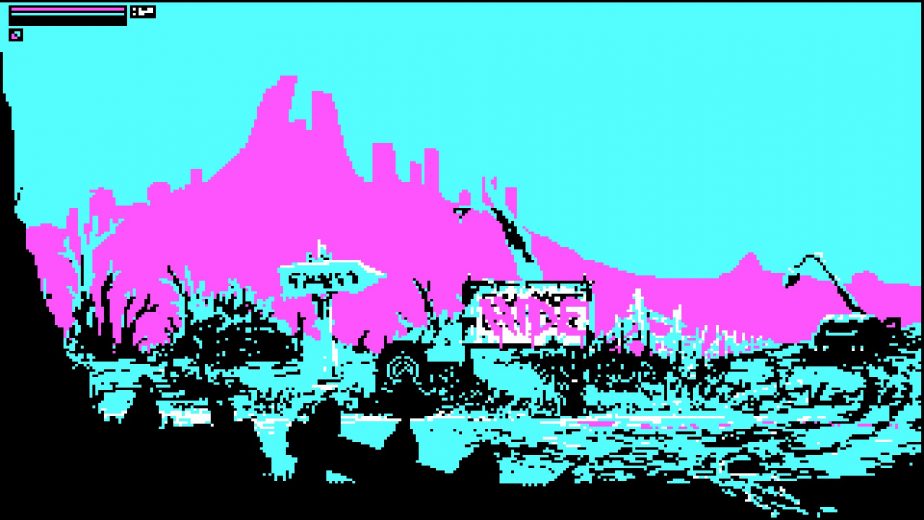 On your first playthrough, these tablets serve as checkpoints and also refill your health.

The Ancient Ruins is mostly a melee focused level where you’ll be fighting a tribe of hostiles. It’s probably the hardest level in terms of traps and combat but also gives you access to some decent melee weapons. The Forgotten City is more of a ranged combat area where you’ll assist a band of friendlies against hostiles using rifles and shotguns. The Unholy Lab is more of a stealth focused area and unlike what I did in my playthrough, it might be best to save this level for when you have the stealth upgrade that makes you invisible. Otherwise this level is truly a terrifying place and really gives the game some horror vibes, where you’ll be running for your life a lot.

As you explore the levels you’ll not only come across fragments to collect, but also items that give you permanent upgrades. These include a stealth upgrade that allows you to become invisible when crouching, increased health, armor and so forth. While you don’t require all of these items to reach the final level, they do generally help make the adventure less painful. You can carry a maximum of two weapons at any given time. The game takes a bit of a modern approach to weapons though as once they run out of ammo you have to find a replacement, so you’ll be switching out your weapons constantly.

Enemies will always drop their weapon if they are carrying one, which helps give you options. Choosing which weapons to hold on to becomes a tactical choice since they can help you in the levels where they are sparse or non-existent, as each level offers very different gameplay experiences. 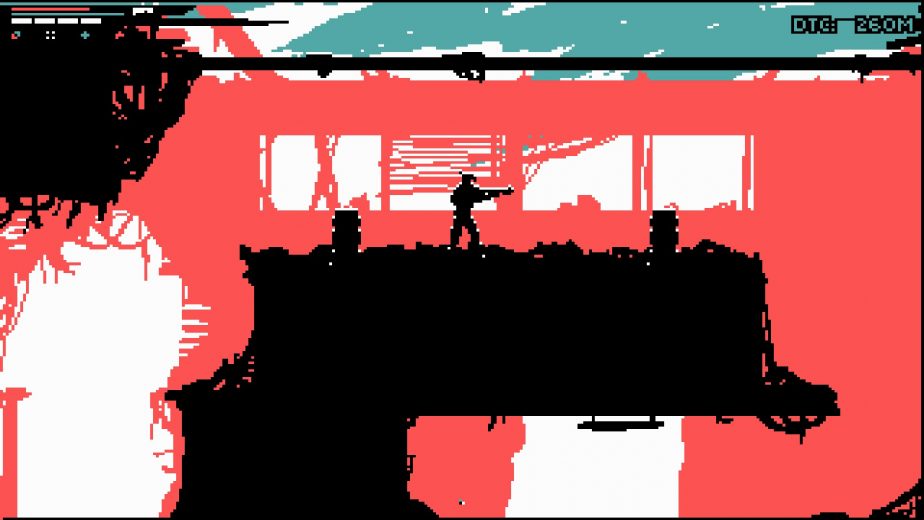 The game will offer very different experiences in each level, and also switch between different CGA palettes frequently.

The game plays very much like cinematic platformers of the early 90’s. If you’ve played games like Another World/Out of This World, BlackThorne or Flashback, it should feel pretty familiar. For people more used to Mario or Sonic style platformers, cinematic platformers tend to feel a bit sluggish and unresponsive due to the heavy amount of animation that has to play out for every action. But if you’re like me and grew up with the genre, you probably won’t have much of an issue with it. The trick is mainly to plan your movements in advance, and be aware of how your character moves in kind of blocky increments instead of exact locations. It’s a bit hard to explain but once you get the feel for it, it becomes second nature.

Now to move on to the game’s alleged roots as a 1987 game and it’s so called “remaster” label. It’s all pretty much fake. There is simply no way this game is originally from 1987, nor is there any way it is a remaster. Prince of Persia, the game often touted as the game to popularize this genre didn’t come out until 1989. And games like Another World and Flashback which this game feels extremely derivative of, didn’t come out until 1991 and 1992 respectively. And the game’s startup sequence not only copies lines of text from DOOM, which came out in 1993, it also includes lines of Linux text which would never belong on a DOS system. 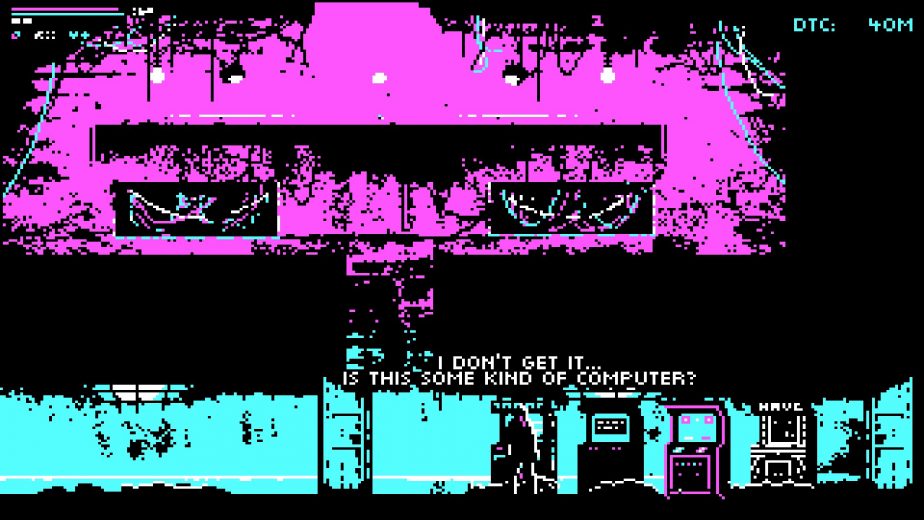 Your character will often react to or interact with the environment, often quipping on things like arcade machines.

And of course then there’s the enormous fact the game is not running in a 4:3 ratio. You see, while some games did support video modes that technically were widescreen in the 80’s, most games opted for a 320×200 resolution, which normally would look really stretched on a widescreen 16:9 monitor. Except this game does not. While you could boil this down to the “remaster” bit, there is one massive question on my mind. Why CGA?

In 1987, several video modes were available in fact. 16 colour EGA was most common during this time for PC games, a standard which launched in 1984 already. Heck, VGA which supported 256 colours LAUNCHED IN 1987! And not to mention you had the Tandy standard which also supported 16 colours. Most games of the late 80’s supported multiple modes, and granted CGA was among them. But the way this game utilizes CGA is unlike any of the games from the 80’s. CGA was often utilized with composite monitors in mind where the colours would blend together and create more colours than the 4 colours the CGA cards were capable of. But The Eternal Castle uses CGA more to simulate shapes and lighting in a far more modernized way that simply no games of the era did. The only reason this game would use CGA is for artistic purposes.

And it does not always use its graphics well either. A lot of text is near impossible to read, almost like it’s been poorly scaled down, which I myself have had issues with being a game developer, but if the game was a legitimate product it would not have this issue.  They could’ve gone with EGA or VGA and still gotten away with “it’s a 1987” game but for its gameplay style, even that would be a stretch and going for a lost 1991 game would be far more applicable. 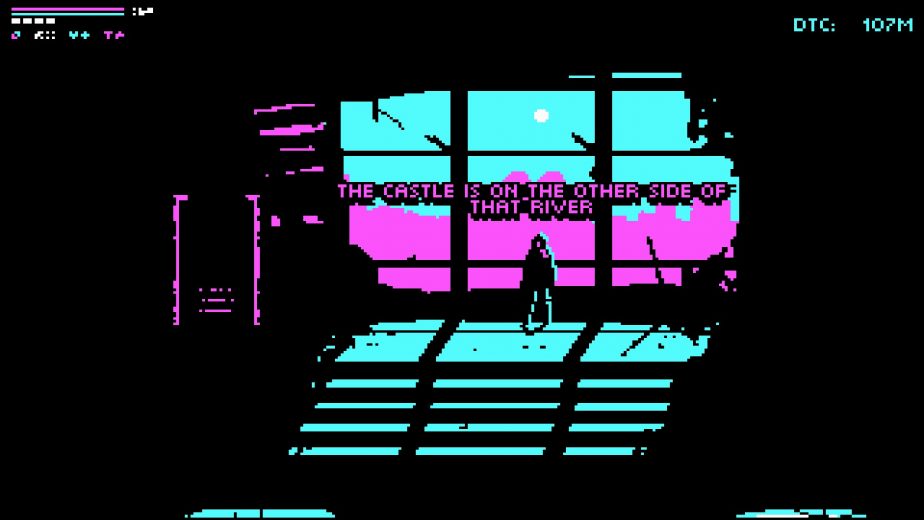 Marketing the game as a lost 1987 game feels like a missed opportunity as well. They could’ve gone all the way with this, actually done proper research into DOS games, maybe even developed the game as an actual CGA game on actual DOS hardware. Not saying I blame them for not doing that given the enormous amount of difficulty associated with such a task. But when it’s so easy to tell the game is a modern design, it really feels like they expect their player base to not know better. Instead of just making a game based on a very shallow understanding of PC gaming from the 80’s and 90’s, they could’ve gone the way of MURI, Ion Maiden or DUSK to create a game that could legitimately be a lost game.

The game’s use of bitcrushed sound effects makes it painfully obvious the game has no roots in the 80’s. And it features no option to listen to original PC speaker sound effects. The sound effects aren’t bad but they definitely don’t feel like actual PC sound effects from the era. At least the soundtrack is excellent, featuring everything from ambient noise to driving synthwave beats. While it does not at all feel like an actual product from the 80’s, it does feel like a tribute to them, much like the entire retrowave culture does. 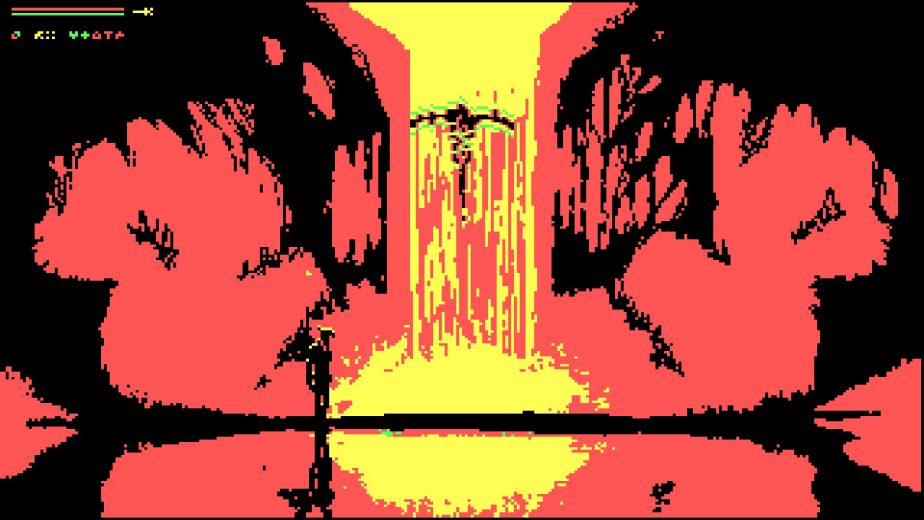 The final boss battle is probably the game’s high point and feels like a well earned climax.

All criticism aside though, this does not at all make The Eternal Castle a bad game, but it does make any claims of it being an actual 1987 PC game remastered complete bullshit. But for what it is, it’s still a really good game with hand crafted animations in a really striking and bold art style that stands out in a sea of Nintendo 8bit clone games.

The CGA style is more used as a filter, and in that regard gives the game a unique style where there is a lot of detail but it’s all hinted at and you’re never quite sure what you’re looking at. It gives the game an eerie alien atmosphere that very much fits its post-apocalyptic feel. At times it feels like you’re exploring an entirely different planet, where things feel familiar yet look completely different. It’s weird how the game completely captures the feeling of playing oldschool PC games without succeeding at itself feeling like one. And you’re not likely to have ever played anything quite like it.

Much like a lot of modern retro games, it’s simply a big tribute to our childhoods. To growing up with games that brought us into another world of archaic graphics and mastery through repetition. It’s definitely worth a grab if anything for capturing some of that essence.