With the Battlefield 5 Open Beta over and done with, DICE has recently laid out its plans for upcoming changes. These will be coming in time for the game’s November launch. In the meanwhile, the studio has also published a series of detailed class breakdowns; each looking at one of the core soldier classes in Battlefield 5. The Assault class should certainly be familiar to Battlefield fans, but it does have a few changes going in to Battlefield 5.

What Players Can Expect From the Battlefield 5 Assault Class

DICE describes the Assault class at excelling at close and medium range combat. Certainly, it’s the class best-suited to frontline fighting, as its name implies; “Choose this class if you want to lead an attack or clear out dug-in, stubborn enemies in the nooks and crannies of an area,” says the studio. The class is generally designed to balance offence and defence; Assault players will be manoeuvrable and adaptable, but won’t have the sheer power of heavier firearms like sniper rifles or machine guns. Indeed, DICE singles out a vulnerability to enemy snipers as a weakness of Assault.

Most Assault weapons are suited to hip-firing; their Primary Weapon Categories are “Assault Rifles” and “Semi-Automatic Rifles”. Meanwhile, their Starter Gadgets are “Rifle Grenade Launcher” and “Sticky Dynamite,” making them well-suited to taking down enemy defences and armoured vehicles. Players will be able to unlock more weapons and gadgets as they progress in the game. 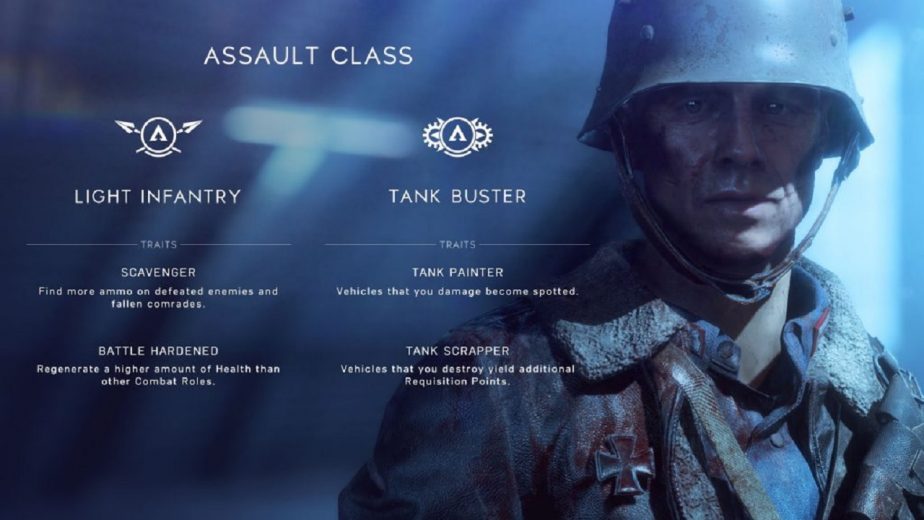 In Battlefield 5, players can choose from one of several “Combat Roles” for their class. Combat roles offer different loadouts and abilities to help bolster certain playstyles. Each of the four classes will feature two Combat Roles when the game launches in November. More will come with post-launch content. Of the initial two, one will be equipped by default, and players will have to unlock the second.

The default Assault Combat Role is Light Infantry. Relatively simple, Light Infantry grants players the Scavenger ability, allowing them to pick up more ammunition from fallen players, and Battle Hardened, which lets them regenerate more health. The other Combat Role which players can unlock is Tank Buster. This role will give Assault players the Tank Painter ability; any vehicle they damage will automatically become “spotted”. It also grants Tank Scrapper, which gives you bonus Requisition Points for destroying vehicles.