A group of players have become the first to discover what may be the most powerful Fallout 76 boss; a Scorchbeast Queen. The group caused a Scorched Earth event by firing one of the game’s nukes onto a Fissure Site, and the results were even more terrifying than the effects of a standard nuke.

Getting access to a nuke in Fallout 76 is not an easy task. It requires players to hunt down several specific enemies, decipher a code, and then descend into a launch silo to access the targeting computer. Once you do all of that, you are able to launch a nuke somewhere in Appalachia. The primary purpose of launching a nuke is to start a special event; the area where the nuke lands will temporarily turn into a heavily-irradiated wasteland filled with high-level enemies and loot. This particular group of players launched a nuke on top of Fallout 76’s Fissure Sites; the dangerous areas where Scorchbeasts make their lairs. What happened next was terrifying. 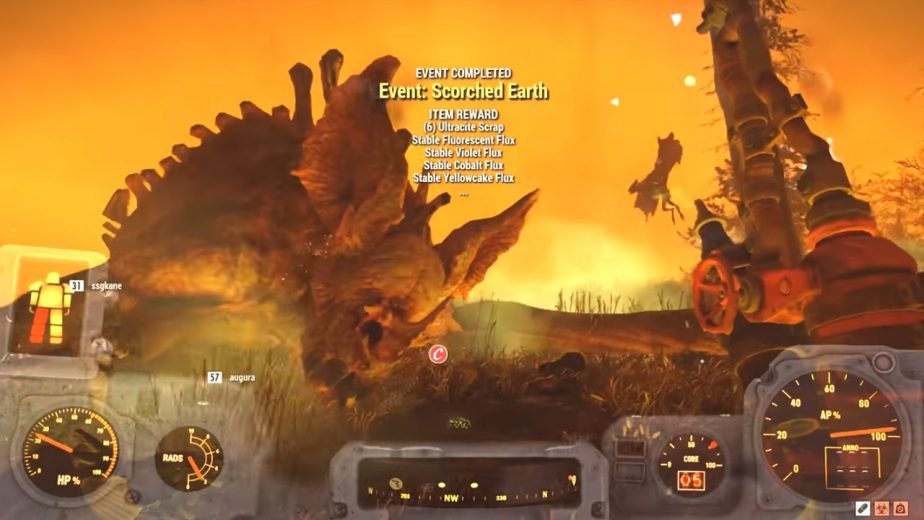 The experience was recorded by YouTuber Nickaroo93. What they found was that striking a Fissure Site with a nuke causes multiple aggressive Scorchbeasts to spawn. More importantly, however, was that the game spawns a massive, level 95 Scorchbeast Queen. This enemy may well be the most dangerous and powerful Fallout 76 boss currently in the game. The Scorchbeasts had backup too, in the form of Deathclaws, Ghouls, and Mega Sloths, all of the “Scorched” variety.

A large number of players converged to bring the monster down. Nevertheless, it takes the group more than 20 minutes to succeed, and several people die during the course of the battle. Once the Scorchbeast Queen was defeated, players were able to loot her to claim all manner of high-level loot. This includes Ultracite items, the best crafting material in Fallout 76.