On Tuesday, the NBA 2K League Draft 2019 edition went down at Barclays Center in Brooklyn, New York. The big event helped determine which talented gamers available would play for the 2K League teams in the coming season. Leading the way as the No. 1 pick was Ria, while Gradient went second overall to the Warriors. Here’s a look at the first two rounds of the NBA 2K League Draft results for 2019.

In 2018, Dimez was the inaugural draft’s No. 1 pick. The 2019 NBA 2K League Draft tipped off with Jazz Gaming making the top pick. They’d opt for Ria as the No. 1 overall choice. Later during the draft show, they spoke with Ria about being the first pick. He said he’s been quite busy with the media circuit already since becoming No. 1 pick.

"I'm just taking it in, enjoying it… having a good time."

Ria chats with the analysts about his experience so far at the 2019 #NBA2KLeague Draft! pic.twitter.com/w8hI1DfgGb

When asked about what position he’ll play for Utah, “I’m gonna start off at the five and then from there, whatever works.” He’ll join a team that didn’t quite make the playoffs last season. He guaranteed a playoff berth earlier but then later said, “We’re gonna be strong, I’ll guarantee that.”

The second pick in the draft went to Warriors Gaming who selected Gradient. After that, Bp, MrStylez_, and PeteBeBallin rounded out the top five picks. Here’s a look at all 21 of the first round picks. 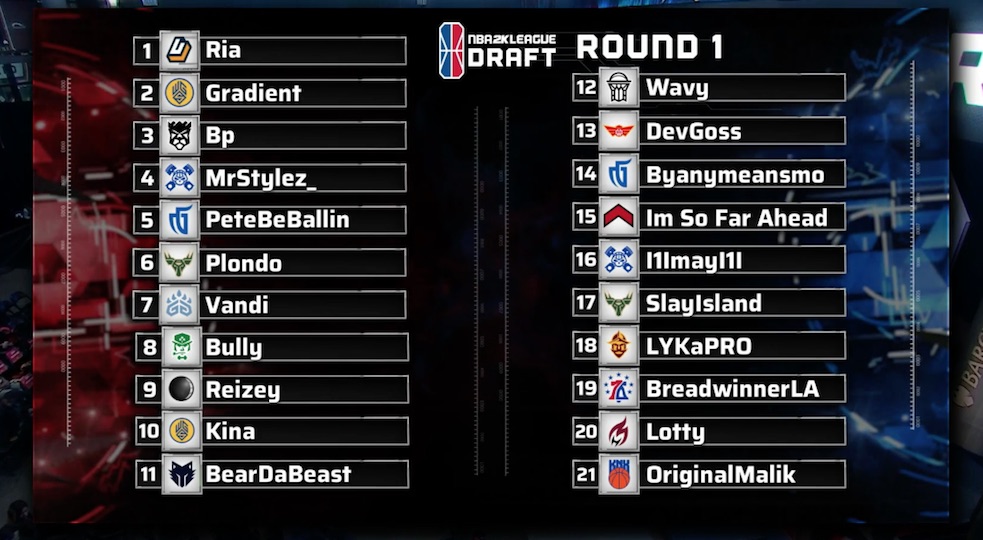 As the second round arrived, it was very much like the NBA Draft based on attendance. It featured players who were deserving of their spots but not necessarily in attendance for the event. Starting things off with the top pick for the round was Kings Gaming. They’d opt for BallLikeSeem. EasyMoney would go to Jazz Gaming while Lord Beezus would go next, followed by Sherm, and chaddynick.

As seen below this round featured just 15 total picks. That’s due to the fact that teams lost picks in the 2019 draft if they opted to retain players. So the rounds were up and down as far as the number of total picks in them this second year of the 2K League. 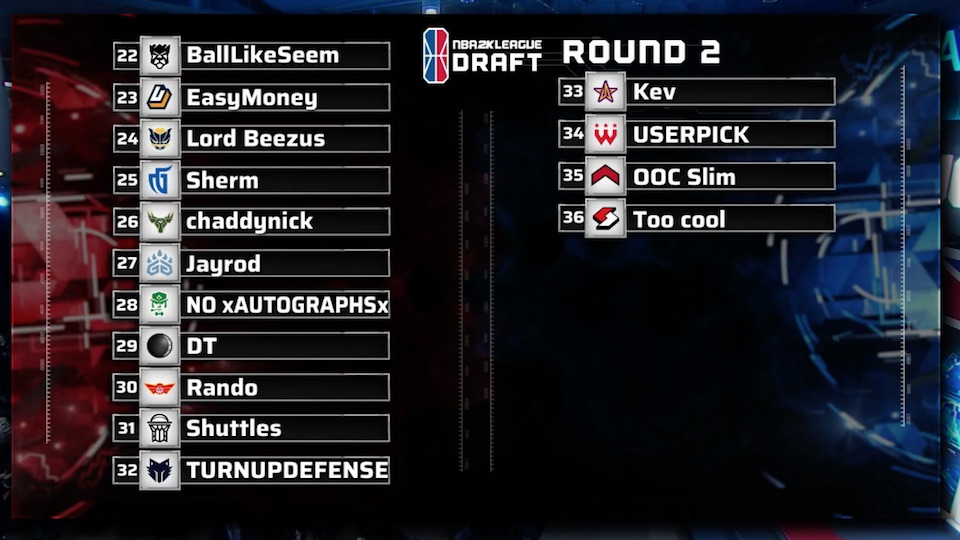 For this year’s season, Champion is the official outfitter for the NBA 2K League as they’ll provide uniforms, practice wear, and travel wear for all 21 teams. Fans will be able to purchase gear to support teams as well. In-game avatars will also rock Champion.

In addition, 2K League announced a new partnership with Raynor Gaming Chairs to provide the official chairs for the league this season. It’s certainly going to be an exciting 2019 season based on all of the teams’ latest picks and the continuing expansion of the league.

It’s worth mentioning that ahead of the 2019 NBA 2K League Draft there were originally going to be 74 picks but that changed to 75. Ahead of the draft, breaking news came that TimelyCook was removed for the 2019 season due to a violation of the code of conduct. So that gave his team Kings Squad Gaming an extra pick in the third round.

Find out more information about the NBA 2K League including the third and fourth round draft results at the official league website.