Players may have already discovered one of the first Easter eggs in Battlefield 5. Reportedly, players in the Open Beta have come upon a snowman on one of the game’s maps which can actually be built, though it serves no discernible purpose.

The Battlefield 5 Snowman in Arctic Fjord

The jolly Easter egg was first found by players in the Battlefield 5 Open Beta. One player in particular, who goes by Velcroninja, posted an image of the snowman to Reddit. The snowman is located near Point A on Battlefield 5’s Arctic Fjord map, halfway up a bank of snow and below a fence. Initially, the snowman appears only as an immobile building schematic. Building the snowman takes no small amount of time, so players should refrain from starting while under fire from their opponents. After completing the building process, the snowman appears, complete with a carrot nose and black eyes. Once built, the snowman doesn’t seem to serve any obvious purpose. However, the Battlefield series has been known to include convoluted and multi-stage Easter eggs, so it could be possible that there is more to the snowman than meets the eye. 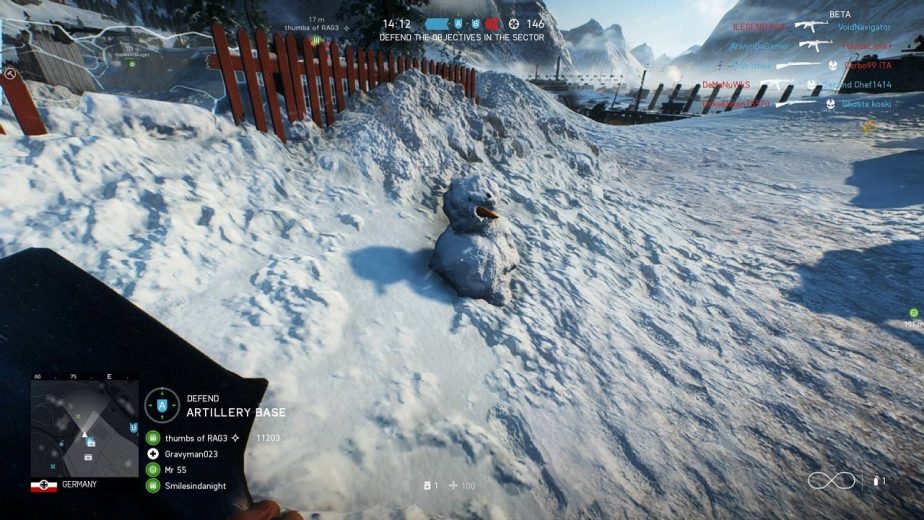 The snowman will remain where it is for the rest of the game, as long as nobody shoots it; it can be destroyed, and must then be rebuilt. Interestingly, the building process refers to the snowman as a “fortification”. However, it is unlikely to be of much use as such. It remains to be seen whether the snowman is just a bit of fun on the part of some developers, or whether it might be part of a larger secret. One Easter egg in Battlefield 1 caused a megalodon to burst out of a puddle in the trenches; it required a complex series of steps to activate. Who knows? Perhaps the snowman is part of some larger Arctic Fjord Easter egg.