PlayerUnknown’s Battlegrounds has, historically, not been a game known for its Easter eggs, unlike Fortnite. Those which were included in the original release were extremely minor, not to mention few and far between. However, that has changed with the release of the Miramar map. It seems that the developers took the opportunity to hide a handful of PUBG Easter eggs around the newer site for players to track down.

This piece of errant graffiti can be found on the Miramar map, north of La Bendita. Players looking for it should make for Minas Generales, and look around the walls of the settlement’s buildings. There, they may spot the words, “El Pollo Es Mio,” daubed upon a wall. Matching with the map’s Spanish names, the Spanish words translate to; “The Chicken is Mine”. (A clear reference to the “Winner, Winner, Chicken Dinner” phrase seen by players who win a game.) 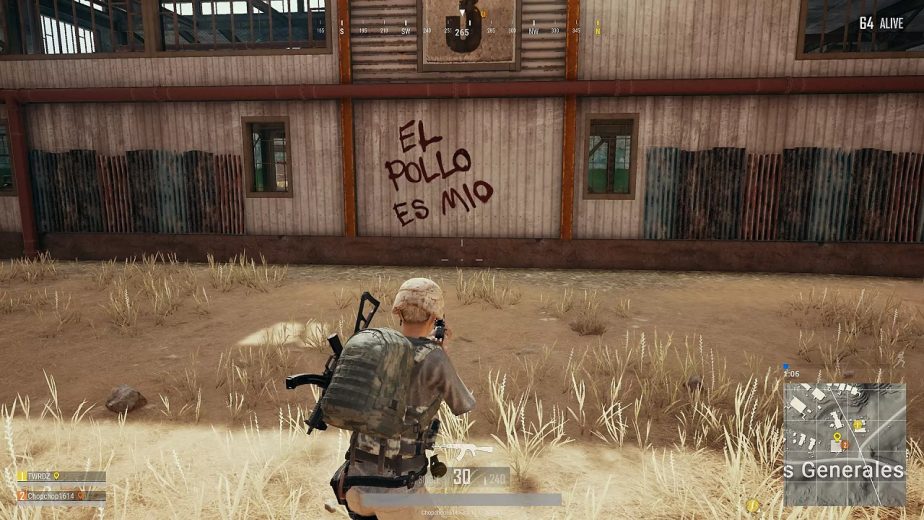 This rather unusual entry in the list of PUBG Easter eggs can be rather difficult to find. Not surprising, given how small it is. To find it, players should travel south from Valle del Mar to an island. There players will find the hill known as Minas del Sur, and it is at its top that this Easter egg can be found. All it consist of is a traffic cone, with a note attached which reads; “I Hate School”. The best guess from fans is that the note could be referring to the school on the game’s other map; a location which is often hotly contested by players at the start of a game. In fact, such is its reputation that many players actively avoid it. It seems that at least one of the developers may harbor similar feelings towards the site. 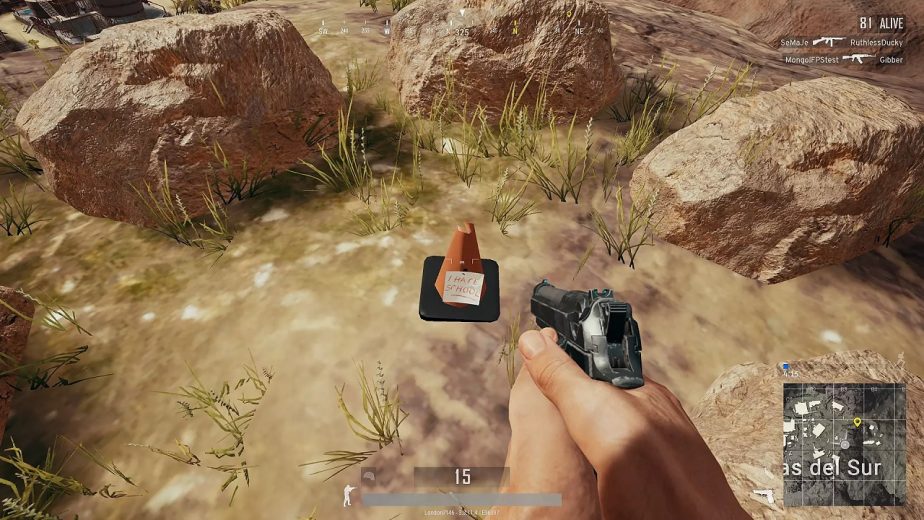 When the Miramar map was first shown publicly, the real names of the various locations were swapped for a much stranger set of names. These were eventually replaced by the more familiar Spanish names seen on the map today. However, there is still a record of the original, unofficial names in Miramar. If players travel to an island east of Los Leones, they can find a replica of the original Miramar map spread out on a table inside one of the buildings. The building is situated at the northern end of a small cluster of structures on the second largest island, which lies due east of Los Leones, just off the coast. 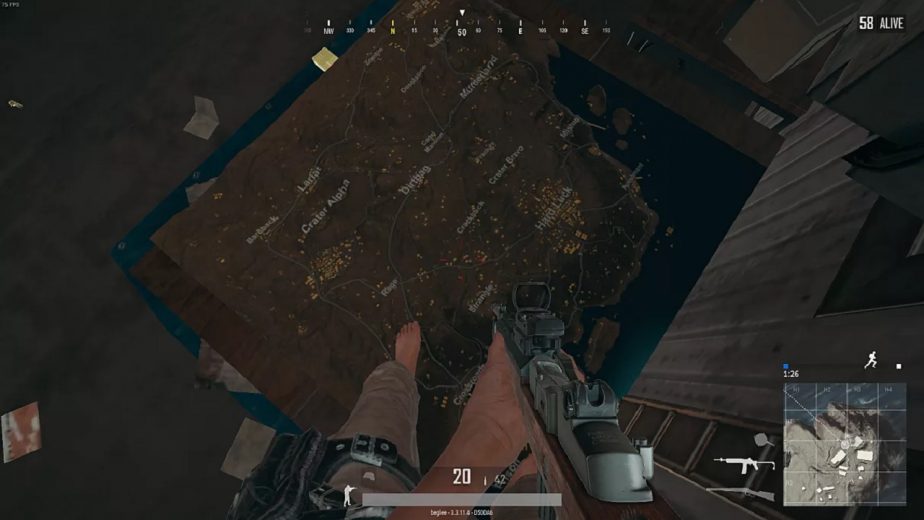 This particularly amusing Battlegrounds Easter egg isn’t too difficult to find in Miramar; simply look for any pick-up truck or station wagon. While the number plates on PUBG’s vehicles are usually meaningless, the number plates on these vehicles read “F2HNK”; an abbreviated form of “Press ‘F’ to Honk”. Surely, this is nothing but a helpful suggestion from the developers for new players who are unsure of their vehicle’s controls. The developers certainly wouldn’t be attempting to mislead anyone into doing something inadvisable. Especially when moving at high speeds. 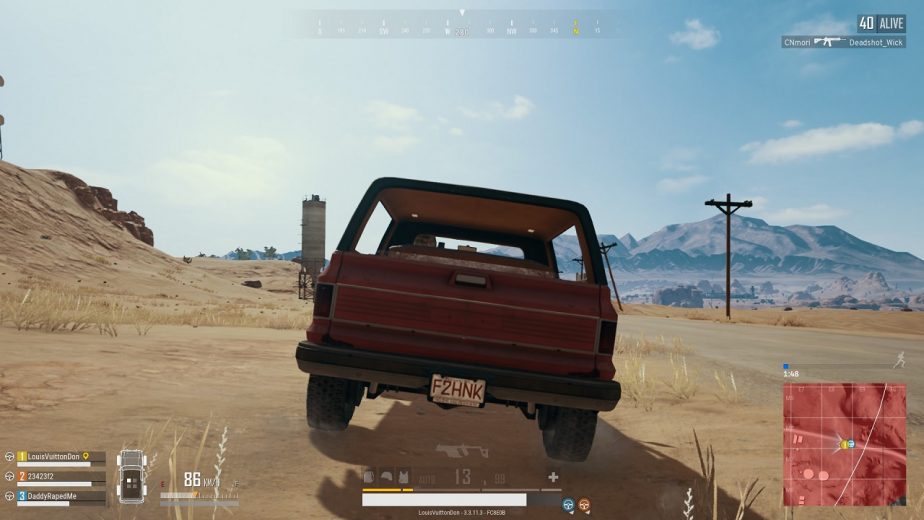 The phrase, “Winner, Winner, Chicken Dinner,” has become synonymous with PUBG since the game first achieved widespread popular. It seems that, with the launch of the Miramar map, the developers decided to give players some idea of where all those chicken dinners might actually be coming from. If players travel southwest from the Oasis for around 200 meters, they will find a smallish structure. Inside appears to be a storage area of some sort, where cardboard boxes are kept packed in metal frames. Written on the side of each box are the words; “Perishable. Chkn Dnr.” 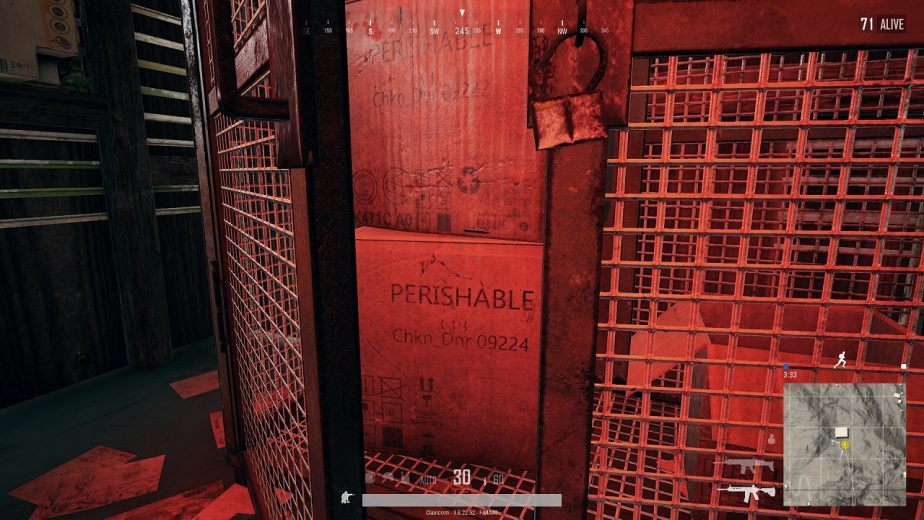