While there are a wide variety of famous (or infamous) historical and legendary characters set to appear in Total War: Three Kingdoms, only eleven of these Chinese heroes feature as starting heroes in the game’s main campaign. Among these Three Kingdoms heroes, the ambitious and power-hungry Cao Cao may well be the best known. This ruthless warlord was a central figure of the Three Kingdoms period and looks set to be one of the game’s most important characters.

Every character in Total War: Three Kingdoms has one of five different character classes. Among the eleven starting heroes, Commander is the most common, and Cao Cao is one of those Commanders. This means that he will have a much higher Authority attribute than other heroes, making him an inspirational leader, both on the battlefield and in his court. “His main strength lies in diplomatic exploitation,” explains Creative Assembly; “He divides and conquers, manipulating relationships between factions by spreading rumours of disunity between them.” 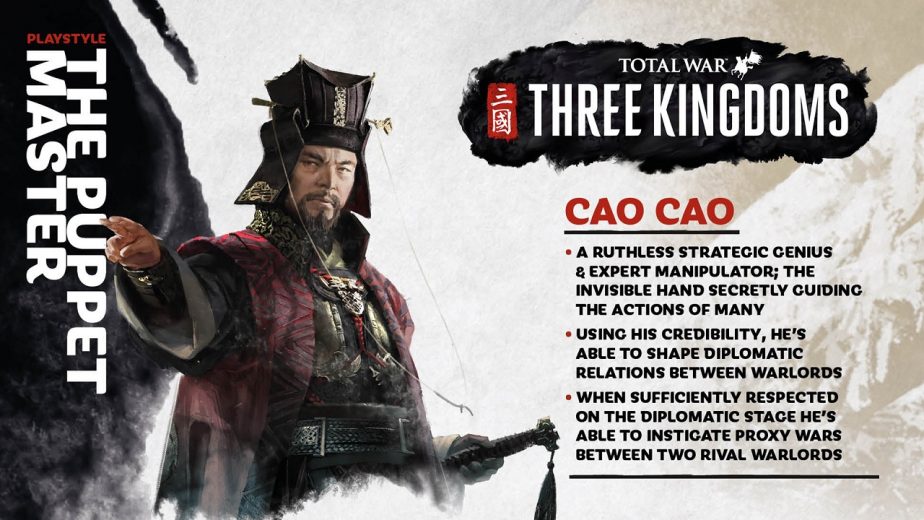 “Playing as Cao Cao is all about long-term strategic planning,” continues his description; “preparing for war in advance by setting the diplomatic stage to strike, while expanding your realm slowly but steadily. His agricultural garrisons help to make his farms more defendable and give stronger boosts to his armies.”

Cao Cao begins his campaign with the support of generals Xiahou Dun and Xiahou Yuan; both very valuable assets. However, his campaign begins at a time when the tyrant Dong Zhuo has named him an enemy of the state. As such, he will likely start with plenty of enemies. He begins in Chen commandery, close to the centre of the map. According to Creative Assembly, his first major dilemma will be whether to take revenge on Tao Qian; the man who may be responsible for the death of his father, Cao Song.

The Rise to Power of the Real Cao Cao

The real Cao Cao began his career, like so many other heroes of the era, fighting against the Yellow Turban Rebellion. After that, he was an ally of Dong Zhuo, though he would eventually turn on the corrupt tyrant and join Yuan Shao’s coalition; a partnership which was depicted in Cao Cao’s Total War character trailer. After the fall of Dong Zhuo, Cao Cao took control of the young emperor, whom many subsequently regarded as his puppet. Thus began his efforts to unify China under his banner. This mission would bring him into conflict with many of the great warlords of the age in a series of bloody wars. He did eventually become the “King of Wei”; a vassal monarch of the state of Cao Wei. However, he was never able to defeat the opposing kingdoms of Shu and Wu.

Creative Assembly has revealed the names of Cao Cao’s four special abilities. However, it’s currently unknown exactly what they all do. They are as follows: