Total War: Three Kingdoms is set to release in just a few month’s time, and Creative Assembly have now released their first trailer of 2019. ‘A Hero’s Journey,’ follows the framework of the game’s previous trailers by focusing on a single character. In this case, not only does it give fans their first look at Zhuge Liang in-game, but it also showcases the gorgeous Chinese scenery which fills the game world.

Creative Assembly’s first trailer of 2019 introduces fans to one of the most important characters in their upcoming game; Zhuge Liang, the legendary strategist. While previous trailers have focused on Sun Jian and Cao Cao, two of the most powerful and important warlords of the Three Kingdoms era, Zhuge Liang is no ruler. Rather, he is perhaps the most skilled strategist of the age, and one of Liu Bei’s most important advisors.

The difference between their characters is clear in the structure of the trailer. Both Sun Jian’s and Cao Cao’s trailers showed scenes of warfare and armies. In comparison, Zhuge Liang’s gives fans a much more peaceful view of China. The ending of the trailer also appears to show an important moment from the Romance of the Three Kingdoms. According to the novel, Liu Bei was told to seek out Zhuge Liang, and together with Guan Yu and Zhang Fei, set out in search of him. Three times, the three sworn brothers visit the strategist’s home, but they do not meet him until the third visit. The tale is one of many episodes concerning the strategist, and is known as ‘三顧茅廬’ in Chinese; “Three Visits to the Thatched Cottage.” 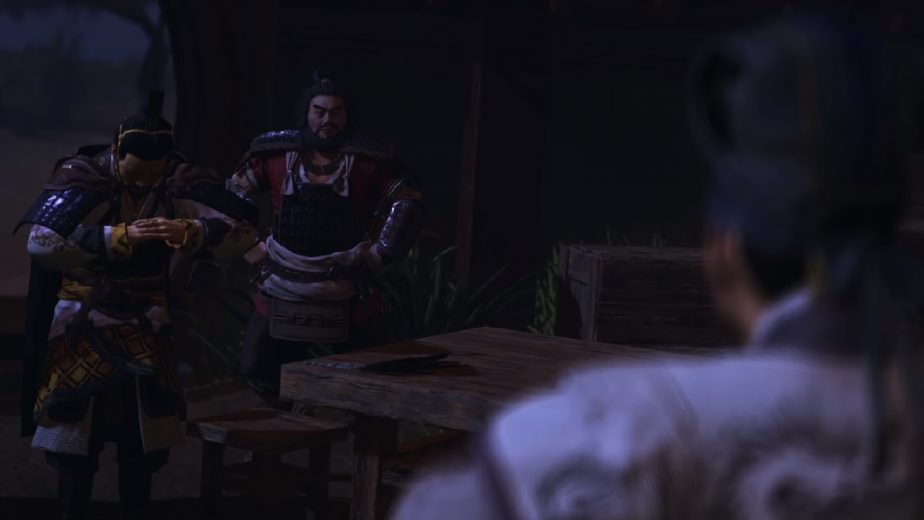 Zhuge Liang is likely to be a major character in Total War: Three Kingdoms, even for players who aren’t playing as Liu Bei. The legendary strategist seems likely to be a dangerous and tricky opponent. Indeed, he is famous for his innovations and clever plans, often thinking outside of the proverbial box to overcome superior numbers.