After a one-day delay due to an unforeseen problem, the first chapter of the Battlefield 5 Tides of War post-launch schedule is now available. Entitled Tides of War Chapter 1: Overture, the first new content release includes a host of new features, including The Last Tiger, a new game mode, and a new multiplayer map.

What’s in the Battlefield 5 Tides of War Chapter 1: Overture

Tides of War is DICE’s post-launch content release schedule for Battlefield 5, and is free to download for all players. Each “Chapter” launches with a handful of new gameplay features, while a series of in-game events then take place until the launch of the next chapter. The headline feature of Overture is the addition of the fourth and final War Story to Battlefield 5; The Last Tiger. This single-player mission tells the story of the crew of a German Tiger tank fighting an explosive urban battle against the advancing American troops near the end of the war. Notably, it’s the first War Story to be told from a German perspective. 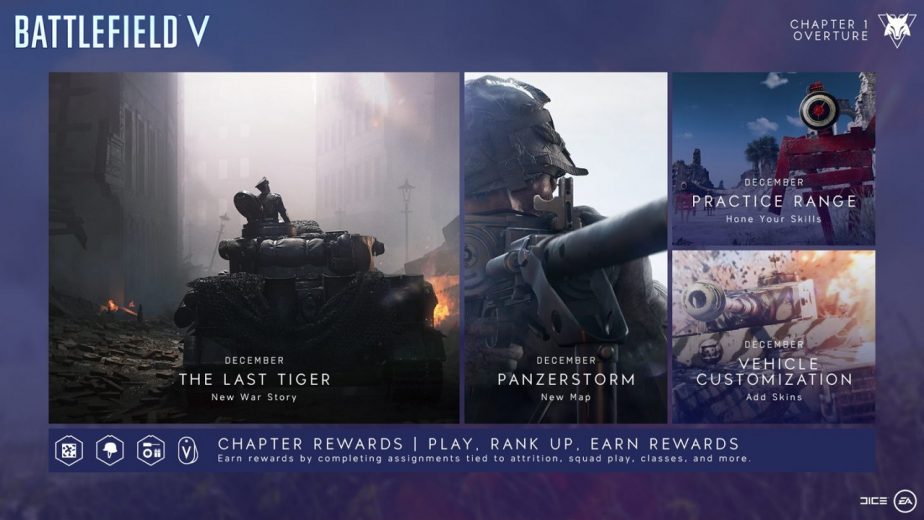 In addition to The Last Tiger, Overture includes Panzerstorm, a new multiplayer map which is dominated by vehicle combat. Furthering the theme of tanks, the update adds vehicle cosmetic customisation options to the game. Finally, players will now be able to use a new game mode called Practice Range to test out weapons and tactics for your multiplayer matches.

Now that the Overture update is available, fans can get to grips with the new content and prepare for the first of four upcoming events. Each event resembles something akin to the game’s weapon progression trees. As you participate in the event, you’ll earn more progression along this event tree, culminating in a special event reward. The content, dates, and rewards for each of these events are as follows: