Starting tomorrow, Destiny 2’s recently launched Forsaken expansion will have its value noticeably increased. According to Bungie, Forsaken will include Destiny 2’s paid expansion pass as a free add-on.

Destiny 2’s expansion pass grants access to the game’s first two expansions: Curse of Osiris and Warmind. Playing through the first two expansions is required to play Forsaken and the expansion pass costs $20. This means that a brand new player would have to invest a minimum of $60 to play up to Forsaken. As of tomorrow, new players will only have to invest $40 to play all of Destiny 2’s current content offerings.

Bungie also isn’t forgetting all the players who already bought the Forsaken expansion. Players who already own Forsaken or who buy it before tomorrow’s change will receive the Veterans of the Hunt bundle. The bundles includes a package of consumables, two unique Exotic emotes, a unique ‘Tiger Strike Black’ shader, and an emblem. The shader and emblem are and always will be exclusive to the bundle. The two emotes though, ‘Knife Trick’ and ‘Coin Flip,’ will eventually join the Eververse loot pool. 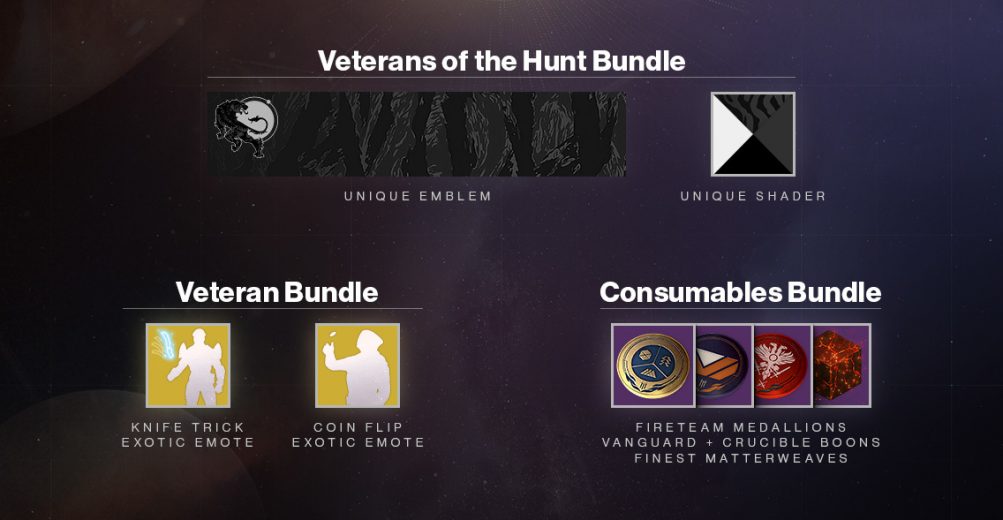 Bungie says the Veterans of the Hunt bundle should start rolling out to eligible players in December. That same month will also see the release of the Black Armory mini-expansion. The Black Armory is the first of three expansions included in Destiny 2’s Annual Pass. The Annual Pass expansions will last into summer, 2019 and Bungie has hinted there’s more to come beyond that.