Although the name of the expansion was leaked early via data-mining, ZeniMax Online Studios today announced The Elder Scrolls: Online Elsweyr, the next upcoming expansion for the Elder Scrolls MMORPG. Moreover, it was revealed that the expansion will only be one part of a year-long story event called the Season of the Dragon.

Elder Scrolls: Online Elsweyr and Season of the Dragon Announced

The Elder Scrolls: Online Elsweyr expansion was announced during a special Twitch stream earlier today, during which ZeniMax Online Studios released the new trailer. This trailer confirms what some had suspected; that Elsweyr is bringing dragons to The Elder Scrolls: Online. Until now, the only Elder Scrolls RPG to feature dragons was Skyrim. However, players are likely to learn much more about the hows and whys of this story soon.

The Season of the Dragon event will span a whole year in The Elder Scrolls: Online, with four key releases on its schedule. The first is an upcoming dungeon pack DLC called ‘Wrathstone’. The Elsweyr Chapter DLC will follow that release, and will be launching on all platforms on the 4th of June. After the release of Elsweyr, ZeniMax Online Studios is planning two more unannounced dungeon pack DLCs; one releasing in Q3 of 2019, and another coming in Q4. All four DLC releases will be standalone, but will also form a larger, four-part story.

Elder Scrolls: Online Elsweyr is available to pre-order from today. There will be four editions of the game available; a Standard Edition, a Digital Upgrade version, and both a Digital Collector’s Edition and upgrade version. Players who pre-purchase the DLC will receive unique reward items when the DLC launches in June. These include the Blue Dragon Imp pet, the Noble Clan Chief costume, new Treasure Maps, one Baandari Pedlar Crown Crate, and some Experience Scrolls. Anybody who pre-purchases Elsweyr digitally will also get the Rahd-m’Athra mount; a mount that will be available immediately in-game once you place your order. 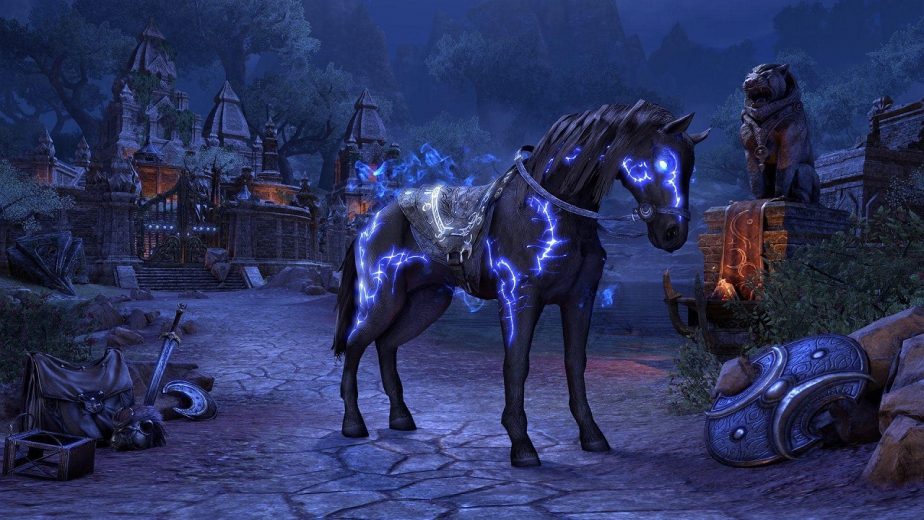