The launch of Battlefield 5 is less than two months away. Following the closure of the recent Open Beta, DICE has been focused on making tweaks and improvements to their upcoming title. The studio recently released the second episode of their Dev Talks series, which detailed many of the areas they are seeking to alter. In addition, DICE has published detailed breakdowns of the four soldier classes which appear in the game. Although a familiar sight in Battlefield, the Battlefield 5 Support class has a few new tricks up its sleeve.

What to Expect From the Battlefield 5 Support Class

While the Assault class is a more balanced and versatile combatant, and the Medic is concerned with keeping their squadmates alive, the Support’s primary role is firepower. They carry the heaviest firearms of any class, but they are also highly defensive. While all soldiers can build rudimentary fortifications, the Support has an arsenal of better schematics to call upon. Like Assault and Medic, Support soldiers fight best at close to medium range, depending on their loadouts. Thanks to their Ammo Pouch gadgets, they’ll also be able to keep their allies supplied in the field.

The Primary Weapon Categories for the Support class are Light Machine Guns and Medium Machine Guns; expect their weapons to be heavy and slow, but more powerful than standard-issue rifles. Their Starter Gadgets are the Ammo Pouch and Anti-Tank Mine. Players will be able to unlock additional Gadgets as they progress in Battlefield 5. 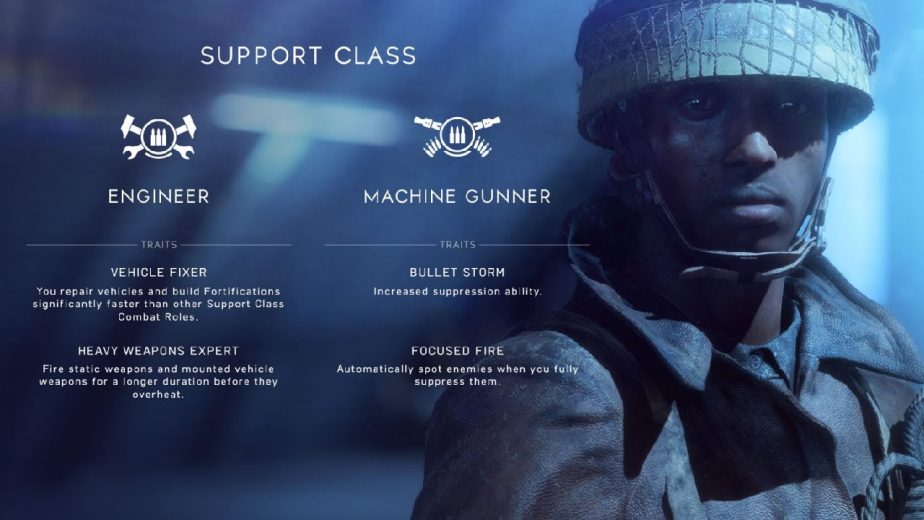 At launch, every class in Battlefield 5 will have two “Combat Roles”. These sub-classes give players additional abilities. One will unlock by default, while the other will unlock during the course of gameplay. DICE has stated that more Combat Roles will be added to the game post-launch as well. The default Combat Role for Support is Engineer. This Combat Role gives players the Vehicle Fixer ability, which speeds up their vehicle repair and Fortification build speed considerably. Engineers also get Heavy Weapons Expect, which increases the amount of time that they can fire static weapons and vehicle-mounted weapons before such firearms overheat.

Eventually, players will be able to unlock the Machine Gunner Combat Role, which turns the defensive Engineer-Support into a more offensive playstyle. Instead of Vehicle Fixer, players will get Bullet Storm, increasing the power of their suppression ability. They will also get Focused Fire; this ability causes any enemies fully suppressed by the Support to be automatically spotted.