“Tales From the West Virginia Hills,” is a new video series which has been released by Bethesda prior to the launch of Fallout 76. Each episode of the series is framed as a radio play from the Fallout universe. Each one tells a tale about one of the new Fallout 76 creatures derived from West Virginian folklore. The third episode details the Flatwoods Monster, quite possibly a unique creature in Fallout 76 for one very specific reason.

Fallout 76 Creatures: The Tale of the Flatwoods Monster

Like the episode about the Beast of Grafton, this latest episode adapts the tale of the Flatwoods Monster from West Virginian folklore. However, it takes a much darker turn very quickly and seemingly confirms that the monsters are extraterrestrial in origin. The Flatwoods Monster remained under wraps until relatively recently. Fans had speculated about whether it could be one of several new creatures depicted in gameplay footage, but it later emerged all these guesses were incorrect. The monster made its first appearance in gameplay footage from the Greenbrier press event, prior to the start of the Fallout 76 BETA.

The original tale of the Flatwoods Monster comes from an encounter which happened in 1952. Several boys claimed to have seen a bright object land in a farmer’s field, and fetched several other people, including a National Guardsman. The Guardsman, Eugene Lemon, described seeing a; “man-like figure with a round, red face surrounded by a pointed, hood-like shape.” 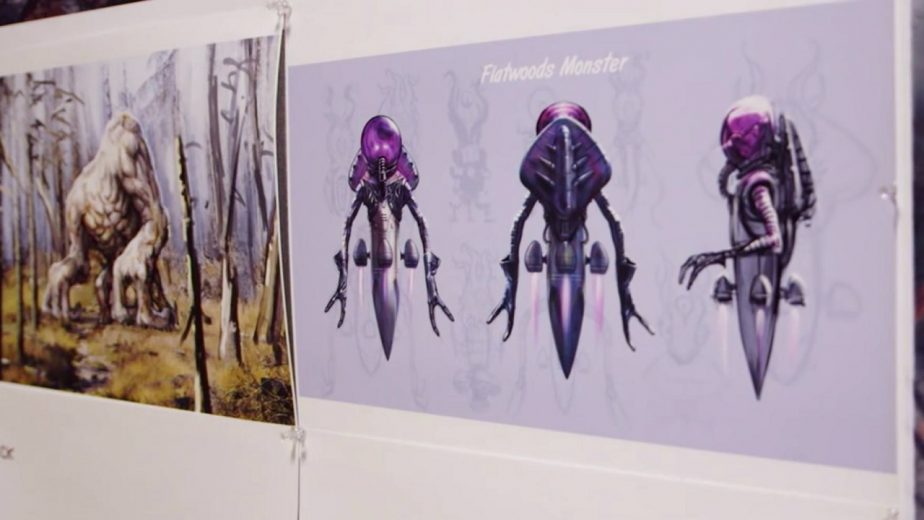 When the creature swooped towards the group, Lemon dropped his flashlight and they ran away. Later searches of the area revealed nothing. However, the story quickly spread across America. An official investigation eventually concluded that the “monster” was nothing more than an owl. The red glow was just the light of a flashing red aircraft beacon visible through the trees. Now joining the roster of Fallout 76 creatures, the Flatwoods Monster is certainly no owl. In fact, the monster is decidedly extraterrestrial in nature. Fallout has confirmed the existence of aliens in the past, but it’s unknown if this is a member of the same alien group or something new.