The Final Fantasy XIV update 4.5 patch notes are finally here! This massive update is but the first of the last two major content updates this year before Shadowbringers. It brings a ton of new additions like the Blue Mage job class, the final Return to Ivalice 24-player dungeon, and so much more. Without further ado, let’s take a look at the absolutely huge Final Fantasy XIV update 4.5 patch notes.

New craftable items have been added to the company workshop.

The following additions and adjustments have been made to subaquatic voyages: 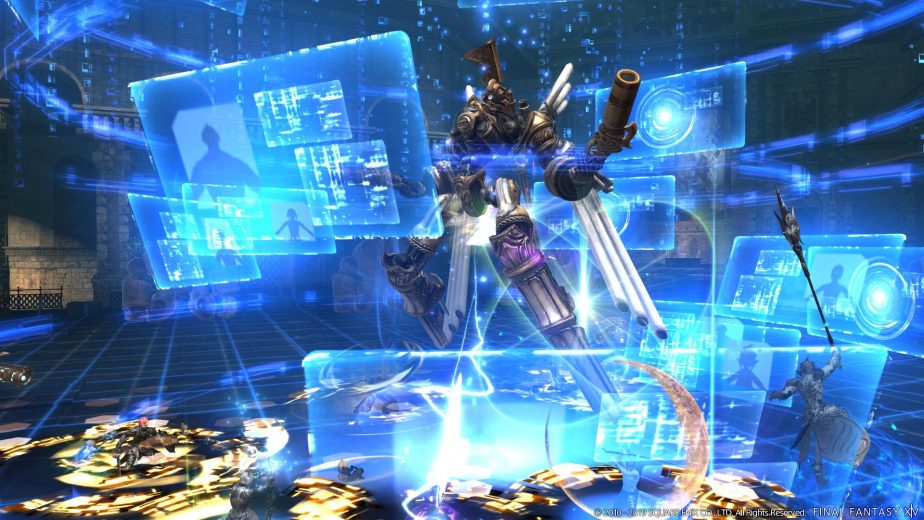 New furnishings have been added.

The limit on the number of interactive furnishings that can be displayed has been removed. As of Patch 4.5, all such items will be displayed regardless of how many are placed.

* The furnishings that can be interacted with are limited to the 40 closest items to the player.
* If playing on a 32-bit operating system, there may be cases in which not all furnishings are displayed.

You can now hide the arrow icons that indicate interactive furnishings. From the System section of the main menu, choose Character Configuration, Display Name Settings, then adjust the Housing Furniture settings from the NPCs tab.

The precision with which furnishing positioning is registered has been increased to prevent items from moving out of place when reentering an estate.

All placed furnishings will now remain in their correct positions until moved by the player.

Lalafell and Roegadyn mannequins have been added.

New estate tags have been added.

New orchestrion rolls have been added.

Players can now use Return and Teleport from inside an inn room.

This change also applies to Eternity Rings and Aetheryte Pendulums.

New aquarium fishes have been added.

Doman mahjong has been added.

Your rating starts at 1,500, and will increase or decrease according to your finishing position in each match. An achievement is available for reaching the highest possible rating.

Passing certain point thresholds will increase your rank. Although you cannot be demoted while in the lower ranks, progressing to the higher ranks puts you at risk of demotion should you perform poorly.

If a player logs out during a mahjong match, tiles will be discarded automatically when their turn comes around. When the player logs back in, they will regain control from the next hand onwards.

If players abandon a match, it will continue without them and their tiles will be discarded automatically. They will also incur the standard penalties for abandoning a duty and will be unable to register for another mahjong match until the previous match ends. In addition, they will be counted as having finished in fourth position. If players do not enter any commands for a certain amount of time, they will be automatically removed from the match.

From the main menu, select Character, Gold Saucer, then Mahjong to check your rating and rank.

The GATE “Air Force One” has been added.

Harnessing the power of blue magic, players can learn to mimic the abilities of wild beasts with this new job.

Out of the Blue

Blue mage is the first limited job in FINAL FANTASY XIV. As such, there are several key points that distinguish it from other jobs.

Rather than gaining new actions by increasing in level, blue mages learn them from enemies. In order to do so, you must first witness an enemy perform a special attack in battle. Once it is defeated, you have a chance of acquiring the ability.
* Job level has no influence on when an action can be learned.

All spells you have learned are recorded in the Blue Magic Spellbook. The book also contains hints on how to acquire other spells.

Before spells can be set to your hotbar, they must first be selected as active actions. You can have up to 24 active actions at any given time.
* Active actions cannot be changed during combat or during certain duties.

Active actions can also be saved together as a set. Up to five active sets can be saved.
* The presently selected active set will not affect the layout of your hotbar.

Certain blue magic spells can be acquired via Whalaqee Totems.

To obtain these items, complete the blue mage quest “Blue Leading the Blue” and certain achievements, then speak to Wayward Gaheel Ja in Ul’dah – Steps of Thal (X:12.5 Y:12.9).

The Masked Carnivale, a duty exclusive to blue mage, has been added.

Test the limits of your blue magic in this exciting new solo challenge.

The Masked Carnivale is comprised of 25 stages in total. You can view a list of all available stages by speaking with the Celestium attendant. Be advised that once you begin a stage, you cannot register or remove active actions.

Many enemies that appear in the Masked Carnivale are weak to a particular element, which can be confirmed when viewing the list of stages. Use this to your advantage and set your actions accordingly.

The elemental weakness of enemies is also indicated by an icon above their display names.

After completing a performance, your clear time, bonuses, and score are displayed.

Bonuses are awarded for fulfilling certain conditions and affect the score.

Weekly targets are available for certain performances, indicated with an icon.

There are three levels of difficulty for weekly targets: novice, moderate, and advanced.

To view the conditions, select a performance with a weekly target, marked with an icon. This information can also be viewed in the Timers menu.
* Weekly targets are reset every Tuesday at 12:00 a.m. (PST).

However, for more of the Final Fantasy XIV update 4.5 patch notes, be sure to check out the official blog.