The full list of Battlefield 5 maps will number eight when the game launches later this month. (Although DICE has already detailed several more set to come in the Tides of War post-launch content schedule.) Fjell 652 is unique among the various Battlefield 5 maps; set high in the Norwegian mountains, it features aircraft but no tanks.

Unlike Narvik, the other map set in Norway, Fjell 652 is a much more alpine environment; “Once a haven for skiers and climbers,” says DICE; “Fjell 652 has become a frozen battleground. Narrow pathways wind around craggy barriers, forcing attackers to tread carefully, and giving defenders the perfect cover for an ambush. Fortifications can mean the difference between holding and losing precious ground, and anti-air emplacements are the best defence against death from above. Battle here among the clouds is as bitter, and ferocious as the blizzards that strike without warning.” 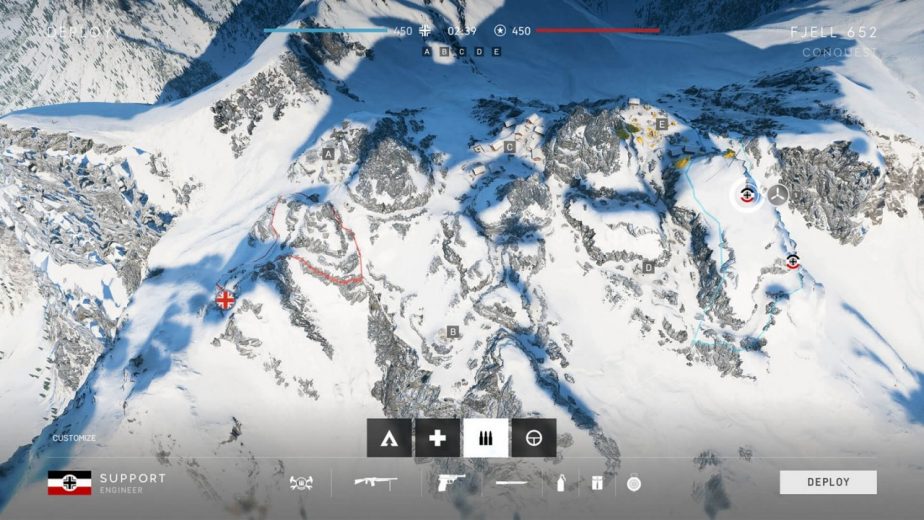 Fjell 652 is inspired by the battles which followed the Battles of Narvik. As the initial German landing troops fell back into the mountains around Narvik. Impressively, the Germans were able to hold out, despite being outnumbered and outgunned in enemy territory. In Battlefield 5, the Fjell 652 map is unique in that it only features Infantry and Aircraft. Tanks do not feature on this map due to the terrain. DICE lists its size as “Small,” making it one of the smallest maps in the game, and as a result, its tempo is “Fast.”

“Anyone who prefers infantry-focused, rapid close combat is going to spend a lot of time on Fjell 652,” says DICE; “This map has a lot in common with the Battlefield 1 map Argonne Forest, particularly its small size and closed environment. Fjell 652, however, isn’t as linear as its predecessor, so it’s less a funnel than an open-air warren of complicated, narrow passages and rocky barriers. Another difference between the two is the addition of aircraft; planes can dart in and around the peaks dogfighting or strafing enemy positions. Control the summit and force the enemy pilots to prove their skills in the gorges below.”


Fjell 652 is available for the Breakthrough, Conquest, Domination, Final Stand, and Team Deathmatch game modes. It also features as the map for days 3 and 4 of the Norway Grand Operation, following days 1 and 2 in Narvik.