When it comes to Wild West-era games, pretty much all of the current focus is on Rockstar Games’ highly anticipated sequel Red Dead Redemption 2 (a game which will apparently come with enhanced graphical support for Xbox One X and PS4 Pro). However, Red Dead Redemption 2 isn’t the only upcoming Wild West title that fans of the genre can look forward to. This Land is My Land, an upcoming title that’s currently slated for an early 2019 release, will offer a very different take on Manifest Destiny than what’s found in Rockstar’s Red Dead series.

While the Red Dead Redemption games focus mainly on the decline of the western cowboy era during the early 20th Century, This Land is My Land will instead turn the clock back several decades to a time period when white settlers were just starting to encroach on the lands of the various Native American tribes who populated the western frontier. Interestingly enough, This Land is My Land isn’t being developed by an American studio, it’s being made by a Ukrainian developer called Game-Labs. 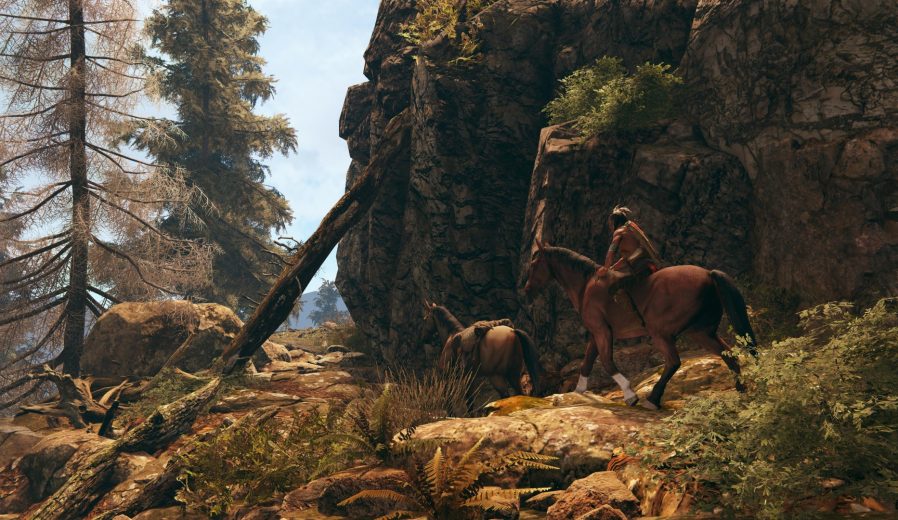 A Ukrainian studio making a game about the American Wild West may seem like an odd prospect, but Game-Labs clearly has a strong interest in American history since it’s the same developer responsible for the American Civil War-themed Ultimate War PC strategy game series. However, whereas the Ultimate War games are strategy-based simulations, This Land is My Land will take a much more visceral approach, casting players as a Native American warrior who pushes back against the violent incursions of the white settlers.

According to an in-depth preview from Polygon, the game’s Native American protagonist won’t hail from a designated tribe and will instead function as a sort of amalgam of all the tribes who called the western frontier home (Cherokee, Lakota, Apache, etc.). Along with traditional Native American weaponry and firearms scavenged from defeated settlers, players will also be able to use stealth tactics to sabotage and terrorize their enemies, a handy strategy to employ considering they’ll often be outnumbered and outgunned.

It’s not yet clear how long a typical playthrough for This Land is My Land will take, but Game-Labs is finding a clever way to inject a bit of replay value by incorporating procedural generation elements. While the overall landscape will be static, specific landmarks such as mines, outposts, and settlements will appear in different spots during each new playthrough, ensuring that the game’s sense of discovery never fully fades. In a more controversial move, Game-Labs will skirt around the harsher realities of the Indian-Settler conflicts (genocide, killing of civilians) by not incorporating any women or children NPC’s. All of the characters present in the game, the protagonist included, will be male. Game-Labs is working in story elements to explain the lack of women and children, but it still feels like an odd design choice.

This Land is My Land doesn’t yet have a set release date or confirmed platforms, but Game-Labs says it plans to launch the game sometime during the first half of 2019. Given the studio’s development history, it also seems safe to assume that PC will be one of the supported platforms at launch. More information about This Land is My Land can be found at the game’s official website.