Players have less than two months to wait before the launch date of Battlefield 5, since the date was pushed back to November. In the next two months, DICE has made clear that the studio plans to focus on a variety of improvements and tweaks; addressing concerns raised by players during the recent Open Beta. The studio also recently published detailed breakdowns of the four soldier classes which fans can expect to play. The Battlefield 5 Recon class, of all of the four, is perhaps the most changed from its previous iterations in other games.

What to Expect From the Battlefield 5 Recon Class

Like the Support, the Recon class distinguishes itself from the other classes first and foremost by its armaments of choice. While the Assault brings standard close-to-medium range firearms, the Medic brings lighter submachine guns, and the Support brings the heaviest machine guns, the Recon goes into battle with long-range firearms. In fact, they are the only class described by DICE as suited to long-range combat. The new spotting mechanics in Battlefield 5 also make Recon soldiers invaluable for teamwork.

Recon soldiers’ Primary Weapon Categories are Bolt Action Rifles and Self-Loading Rifles. Expect all of these to work best at medium-to-long range. Although they will likely lack any automatic firepower, they should make up for it with accuracy. Fortunately, even players who aren’t confident in their sniping skills can play an effective Recon thanks to the Spotting Scope. The Scope is one of the class’ two Starter Gadgets, along with the Bouncing Betty Bomb. 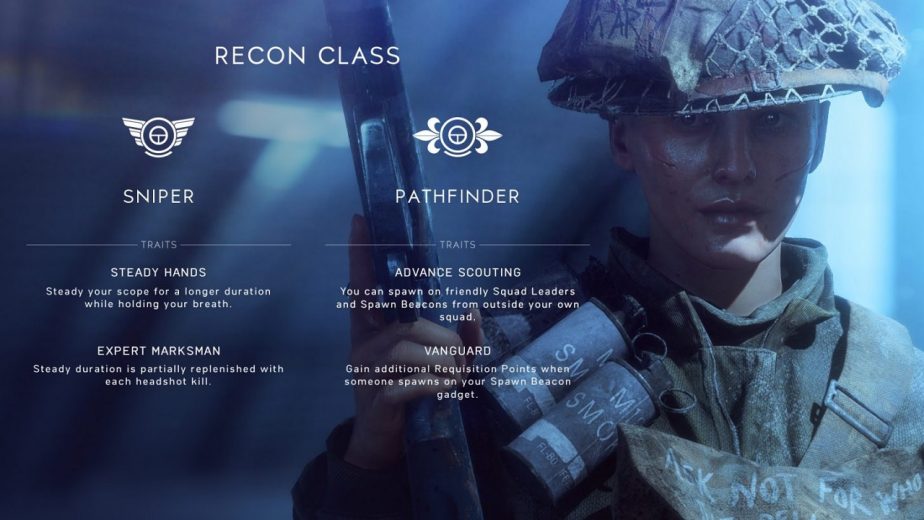 When Battlefield 5 launches in November, there will be two Recon “Combat Roles” available for players. One, Sniper, will unlock by default. The other will unlock during the course of gameplay. Additionally, more Combat Roles will be added by DICE in the Tides of War post-launch content. Players can use Combat Roles to gain additional abilities, helping their soldiers suit different sorts of playstyle. Sniper, the default role, comes with the Steady Hands ability. This allows the Recon soldier to keep their scope steady for longer while they hold their breath. Snipers also get Expert Marksman; this ability replenishes part of their steady duration every time they score a headshot kill.

The second Combat Role is more suited to those players who prefer spotting or scouting to sniping. Pathfinder swaps out Steady Hands and Expert Marksman for Advance Scouting and Vanguard. Advance Scouting allows the Pathfinder to spawn on friendly Squad Leaders and Spawn Beacons, even if they aren’t part of their own squad. This can allow a Pathfinder to range far ahead of their own squad and set up a Spawn Beacon, making it easier for the whole squad to quickly redeploy. In fact, they’ll be rewarded for doing so; Vanguard means that the Pathfinder will earn bonus Requisition Points when a soldier spawns on a Spawn Beacon they’ve set up.