There will be eight different Battlefield 5 maps in the game at launch when it becomes available later in November. Although some of these were playable during the game’s Beta, most haven’t been shown in playable form yet. Now, DICE has published details of every single one. The second of these maps is a variant of the Rotterdam map, and takes place after the events of the Rotterdam Blitz; Devastation.

In many ways, Devastation is the polar opposite of the Rotterdam map. Where Rotterdam is a sunny and picturesque urban landscape, almost untouched by war at the start of a game, Devastation is the same city reduced to rubble. As the Dutch and German forces were forming an agreement to surrender Rotterdam to the Germans following the Battle of Rotterdam, German bombers blitzed the city. The subsequent bombing brought utter destruction to Rotterdam. 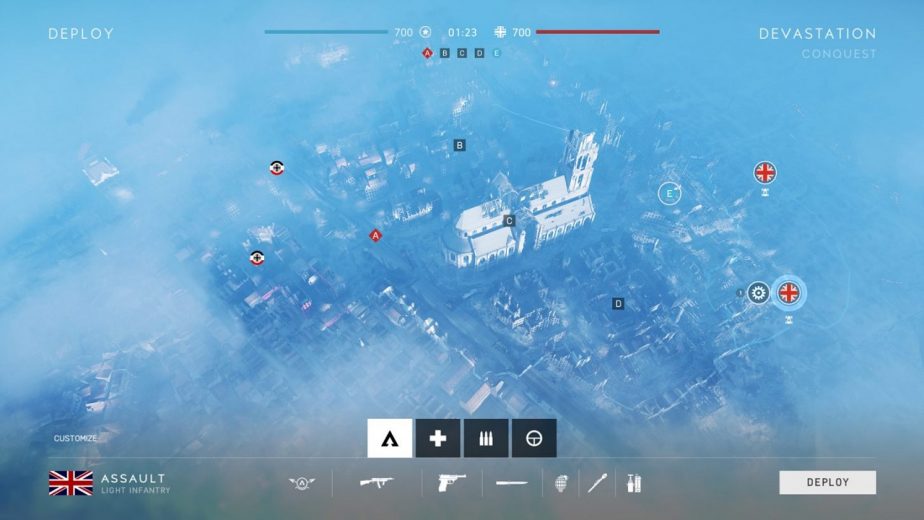 DICE’s overview of Devastation for the Conquest game mode is similar to that of Rotterdam. Once again, the map features infantry and tanks but no aircraft, and is “medium” size. However, the studio describes its tempo as “fast”; “Devastation is an unconventional Battlefield map marked by periods of intense close-quarter firefights, created by the same mind behind Battlefield 1’s Fort de Vaux.

“Direct roads have warped into an aimless blend of claustrophobic avenues of approach, obstacles, and defensive positions,” continues DICE; “Players will have to fight among these ruins, dried out canals, and the metal skeletons of buildings. Several places, most notably the cathedral, still retain their shape and can be used as defensive strongpoints. The abundance of cover left by the bombardments works both ways, so you’ll have to outsmart your enemy and not get trapped in a meat grinder.”

Devastation is available for the Breakthrough, Conquest, Domination, Final Stand, Frontlines, and Team Deathmatch game modes. Additionally, the third and fourth days of the Battle of Holland Grand Operation take place on this map.