When Total War: Three Kingdoms launches in early March, players will be able to choose between eleven different starting heroes for the game’s campaign. The characters who feature as playable Three Kingdoms heroes vary from infamous warlords like Cao Cao, to wise scholars like Kong Rong, and even lesser-known figures like Gongsun Zan. One hero who may be the most famous of them all, however, is Liu Bei; the founder of the kingdom of Shu and a benevolent leader beloved by the common folk.

Every character in Total War: Three Kingdoms falls into one of five different classes. Liu Bei is a Commander, the class of Authority, and the most common class among the eleven playable heroes. This makes him a highly capable leader, both on the battlefield and off, although other heroes may be more competent warriors. His strengths lie in the loyalty he can inspire from his allies, but he begins play in a precarious position. 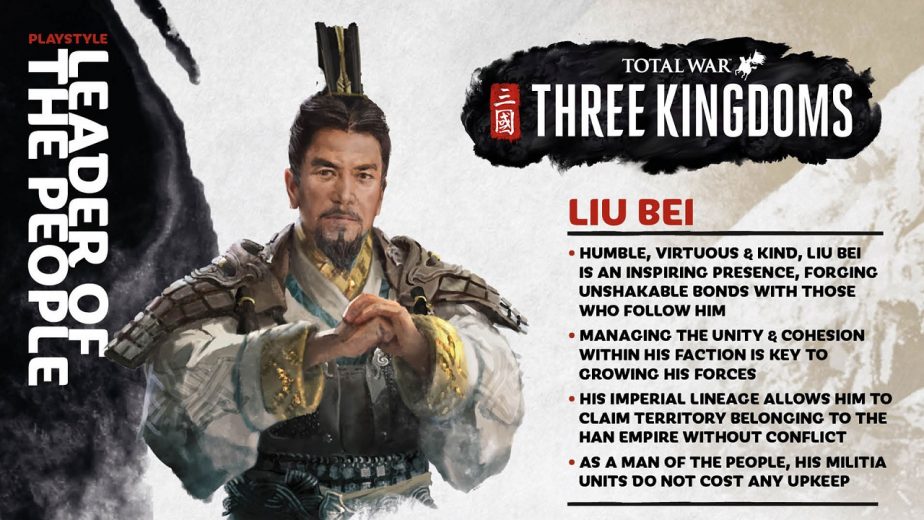 Liu Bei begins play with the largest starting army. However, he starts with no territory under his control, making it impossible for him to recruit additional armies. He begins his campaign in Dong Commandery, but doesn’t actually control the region; he merely begins with a large army of peasant militia. Initially, he will need to defeat remnants of the Yellow Turban rebels, before he becomes embroiled in the larger power struggle between Cao Cao and Tao Qian…

As a leader of the people, Liu Bei has a significant bonus for his peasant militia units; they don’t cost any upkeep! He also has a variety of benefits for a diplomatic play-style; “Due to his imperial ancestry,” explains Creative Assembly; “many see Liu Bei with more legitimacy than other faction leaders, which allows him to confederate with other warlords easier than most factions. And, at the cost of some unity, he can claim territory under the control of the Han Empire without a fight.”

The Oath of the Peach Garden 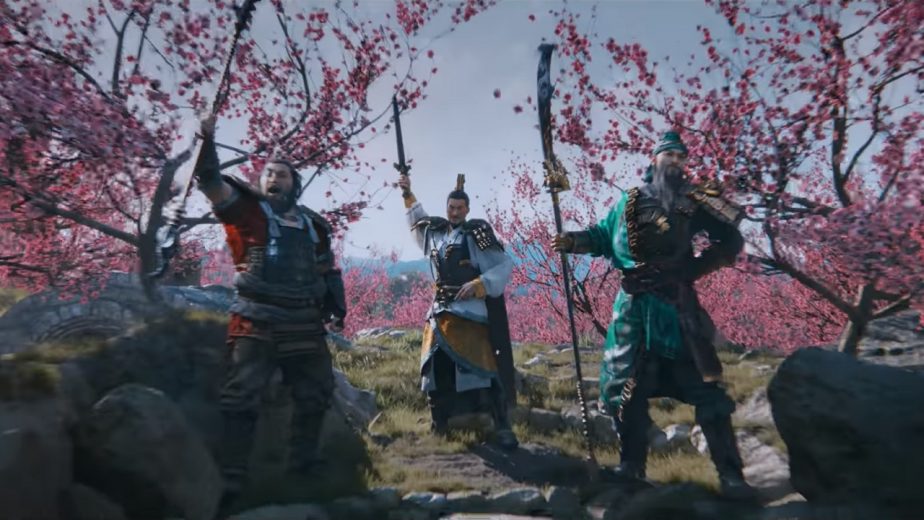 Perhaps Liu Bei’s greatest asset are his sworn brothers, Guan Yu and Zhang Fei. These two legendary heroes are formidable warriors, and the three share a strong bond. According to Romance of the Three Kingdoms; their unity stems from an oath of brotherhood which they swore together before setting off to battle the Yellow Turban Rebellion. The oath and the three sworn brothers are particularly famous parts of the Three Kingdoms era. Indeed, this event appeared during the original announcement trailer for Total War: Three Kingdoms.

Creative Assembly hasn’t provided concrete details of Liu Bei’s different abilities. However, they have revealed the names of each, along with a brief description. As such, fans can take a guess at what they might do in game.