Creative Assembly has now revealed the eleven Total War: Three Kingdoms heroes whom gamers can choose to play in the game’s campaign. The eleven characters includes famous figures like Cao Cao and Liu Bei, and also lesser-known leaders, including Gongsun Zan and Liu Biao. Among these heroes is Ma Teng, the so-called “Protector of the West,” who guards the western border of the Han Empire.

Like every hero in Total War: Three Kingdoms, Ma Teng has a specific class; one of five which are present in the game. Ma Teng is one of just two members of the Vanguard class among the eleven starting heroes, along with Gongsun Zan. Vanguard is the class with the highest Instinct attribute, and is generally seen as the best frontline leader class. Although they are vulnerable to other heroes in one-on-one combat, Vanguards can cut a swathe through basic soldiers and often have access to shock cavalry units. Exceptional army leaders, they can also reduce the recruitment costs of their units. 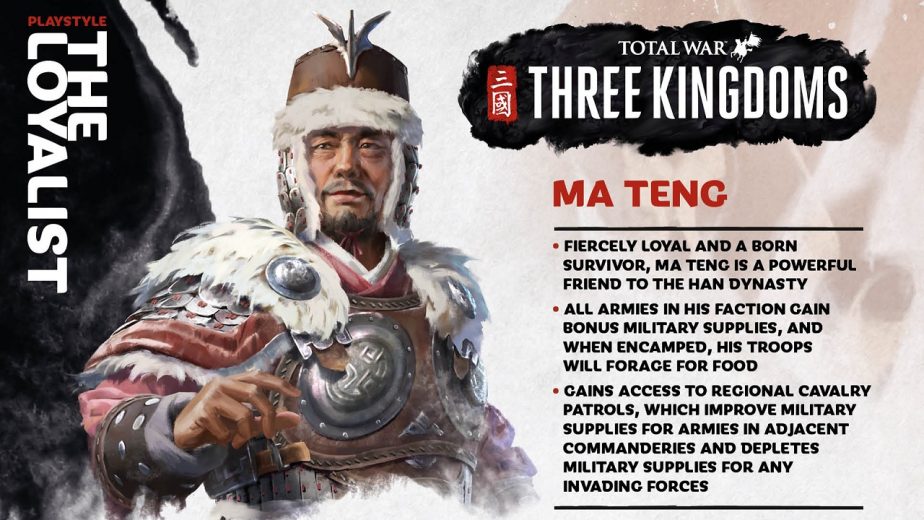 Like Gongsun Zan, Ma Teng puts the military first in his play-style. He is an expert in army logistics, ensuring that his armies are well-supplied; “All armies in his faction gain bonus military supplies,” explains Creative Assembly; “and when encamped, his troops are trained to forage for food. Meaning his armies are strongly equipped to push forward, continue on the front foot, and support a strategy of aggressive expansion”; Ma Teng also has access to a unique building chain called the Xiliang Supply Lines. These buildings improve the army supplies of armies in neighbouring commanderies while reducing those of enemy armies.

Ma Teng begins play in Wudu Commandery, at war with local Yellow Turban rebels. His initial dilemma, according to Creative Assembly, concerns what to do if Dong Zhuo is defeated. If that happens, the tyrant’s faction is likely to descend into civil war, forcing Ma Teng to choose whether to involve himself in it or not. Fortunately, he begins with a significant asset; his son, Ma Chao. Although he won’t come of age until a few years into the start of a campaign, Ma Chao can become a powerful hero. In addition, Ma Teng starts with the support of Han Sui, another warlord who protects the empire’s border.

Ma Teng’s faction is the only one in Total War: Three Kingdoms which starts allied with Dong Zhuo. Due to his fierce loyalty to the Han Empire, Ma Teng is willing to support the tyrant out of a sense of loyalty and duty. Unfortunately, Dong Zhuo has many enemies. Historically, Ma Teng outlived Dong Zhuo, and subsequently (and unsuccessfully) attempted to seize control of the capital with Han Sui. When their rebellion failed, the two went to war against each other, until Cao Cao was able to negotiate peace. For a time, Ma Teng was an ally of Cao Cao. 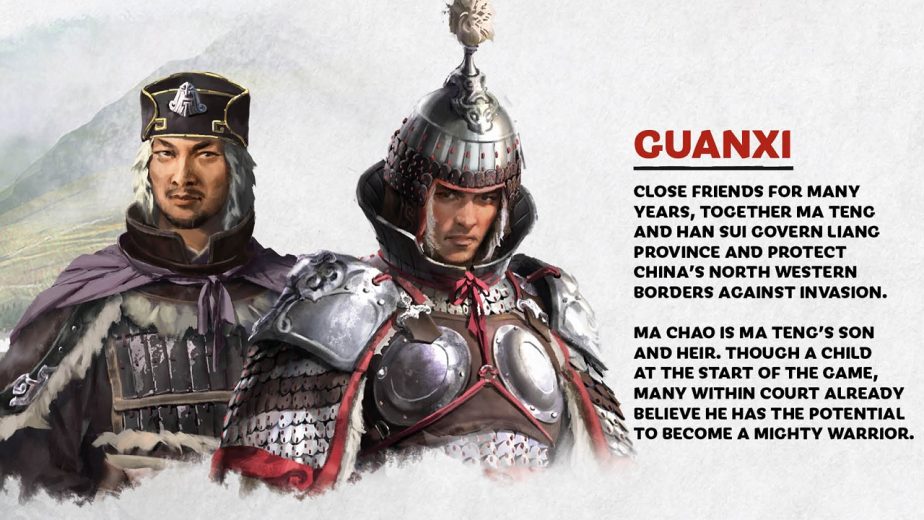 However, Ma Teng’s end came when his son, Ma Chao, joined Han Sui and launched another rebellion. In doing so, Ma Chao publicly abandoned his father and acknowledged Han Sui as his father. As a result of this rebellion, the emperor ordered the execution of Ma Teng. A different story appears in Romance of the Three Kingdoms, however. In the classic novel, Ma Teng instead joins a plot to assassinate Cao Cao. When that plot is discovered, Cao Cao has him and two of his sons executed, prompting Ma Chao’s rebellion.

Creative Assembly has revealed the names of Ma Teng’s various special abilities. However, they have yet to detail exactly what they will do in-game.