Following the conclusion of their most recent three-part series, Creative Assembly has announced what’s coming in their next series of Total War: Three Kingdoms livestreams. The new series, which begins later today, will span three livestreams like the two previous series. It will feature a playthrough of Kong Rong’s campaign, and will also reportedly show the game’s “extreme unit sizes.”

This latest series will be the third campaign playthrough livestream series streamed by Creative Assembly. Their first series featured Yuan Shao’s campaign, while the second featured a Records Mode playthrough of Ma Teng’s campaign. Presumably, this new series featuring Kong Rong will return to the game’s Romance Mode; the less historical version of the game inspired by the Chinese classic novel ‘Romance of the Three Kingdoms.’ 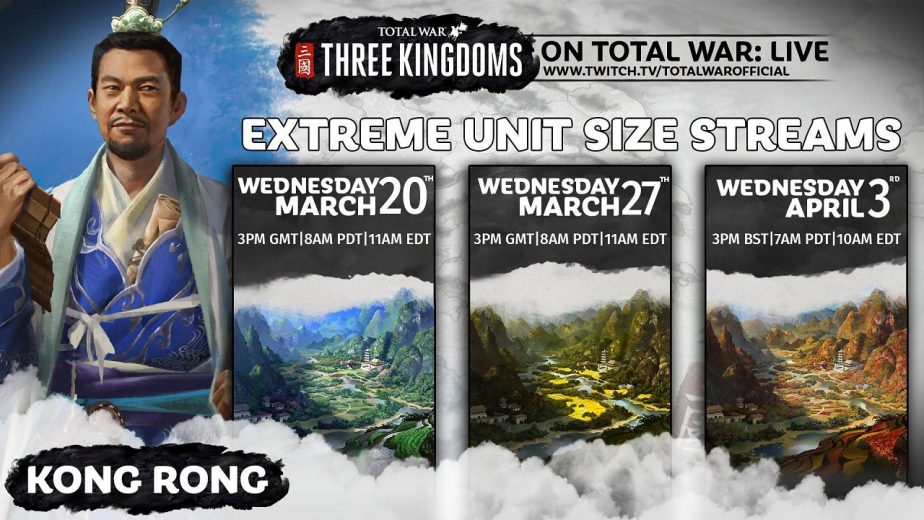 Kong Rong’s playthrough is likely to be very different to the previous two series. While Yuan Shao and Ma Teng are both relatively militaristic, Kong Rong is quite the opposite. Kong Rong is the only member of the Strategist class among the twelve playable faction leaders. Additionally, he has a far greater emphasis on trade than he does on the military. Indeed, Creative Assembly announced the new streams by saying; “We’ll be building a mighty trade empire as the Master Scholar Kong Rong, as well as providing some much-anticipated information on unit sizes.”

Unit sizes is an issue which has been raised repeatedly by some fans, who want to see larger unit sizes in the game. This has been mentioned in past Total War: Three Kingdoms livestreams. However, the studio wasn’t ready to show any more on the topic at that point in time. However, the new series will feature “extreme unit sizes,” suggesting that Creative Assembly will be showing just how big units can get.