Overall, there will be twelve playable Total War: Three Kingdoms heroes in the game’s campaign; eleven whom players can choose between and Dong Zhuo, whose campaign must be unlocked. The heroes chosen by Creative Assembly run the gamut from era-defining warlords like Liu Bei and Sun Jian, to lesser-known figures like Ma Teng and Kong Rong. Zhang Yan falls decidedly in the latter camp. Leader of the Black Mountain Bandits, very little is known about this mercenary outlaw.

Zhang Yan is one of only two playable heroes who are members of the Champion class, along with his fellow bandit, Zheng Jiang. Champions are natural anti-hero leaders, capable of winning most one-on-one fights, although they can be vulnerable to being overwhelmed by enemy units. They work best alongside spear and glaive infantry, which they have easy access to, and their prowess makes them inspirational leaders of the common folk; Champions increase population growth wherever they are, as people whom they inspire flock to join their faction. 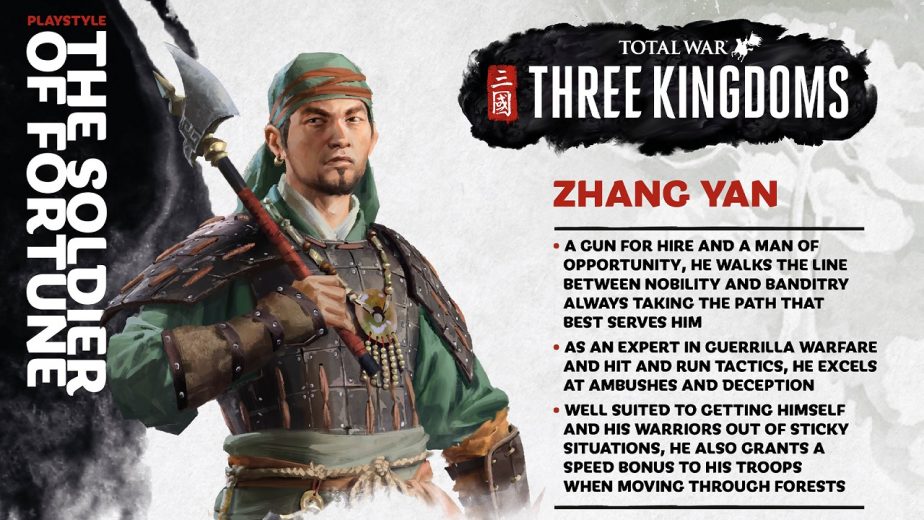 Zhang Yan is a master of hit-and-run guerrilla tactics. For example, he grants his army a speed boost when they move through forests. However, Creative Assembly states that he will likely be one of the toughest warlords to play as; “The primary difficulty comes from his geographical position,” the studio explains; “which, while defendable, is also hard to break out from – especially when he’s surrounded by such powerful warlords as Yuan Shao and Gongsun Zan. Without a wife and children behind him, establishing a family and furthering Zhang Yan’s dynasty is also more difficult, with his success highly dependent on finding the right allies.”

As a result, Zhang Yan is likely to be reliant on diplomacy in the early stages of a campaign, offering his services to a more powerful warlord in order to amass power. Interestingly, Zhang Yan is the only playable warlord who can negotiate with the Yellow Turban rebels. As noted by Creative Assembly; “Zhang Yan’s alliances are mercurial, and his alignment can easily change over time to suit his purposes.”

The King of Black Mountain begins play in Yanman Mountain Commandery, in the north-western corner of the campaign map. With powerful rivals surrounding his territory, building up through the early game could be tough for the bandit leader. In fact, dealing with his warlord neighbours is his initial dilemma according to Creative Assembly; he must decide whether to attack Yuan Shao, Gongsun Zan, or the rival bandits who lair to the north. Fortunately, Zhang Yan does have allies of his own; Li Damu and Yu Du, fellow members of the Black Mountain bandits. Historically, very little is known about Zhang Yan. Born Chu Yan, the Black Mountain Bandits gave him the nickname ‘Flying Swallow,’ because of his impressive agility. When their leader, Zhang Niujue, was mortally wounded in battle, he chose Chu Yan as his successor. As such, Flying Swallow changed his name to Zhang Yan as a way of honouring the former leader. Under his leadership, the Black Mountain Bandits became a highly formidable force which raided up and down the borders of the Han Empire.

Eventually, in 204, after years of fighting Lu Bu and Yuan Shao, Zhang Yan joined the forces of Cao Cao, who appointed him ‘General Who Pacifies the North.’ After helping Cao Cao defeat the sons of Yuan Shao, he officially surrendered himself to the imperial court, giving up his past life as a bandit. He was subsequently enfeoffed as the ‘Marquis of Anguo Village,’ presumably as a reward for his service under Cao Cao. After that, the former bandit was lost to history.

Four of Zhang Yan’s special abilities appear on his official character poster. However, Creative Assembly has yet to provide details of what they will do in-game. Instead, each ability has only a single line of vague descriptive text.