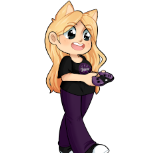 Would you like to see different coloured Series X or S consoles?