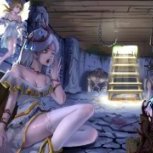 By Empire Of Sight, August 20 in Video Games